In political circles the narrative is that the Freedom Convoy protesters hold unacceptable views.  This is a great sound bite for the news but doesn’t really explain what is and is not acceptable.  As a public service I have accumulated statements from politicians and media to compile a list of acceptable and unacceptable beliefs.

After going through this exercise I have discovered, to my dismay, that all of my beliefs are unacceptable.  I would apologize to Justin Trudeau but I can’t find him.  No one seems to know where the Prime minister of Canada is.  I believe that a Prime Minister hiding from protesters and ignoring the will of the people is not how democracy should work.  That too is likely an unacceptable belief.  Hey I gotta be me. 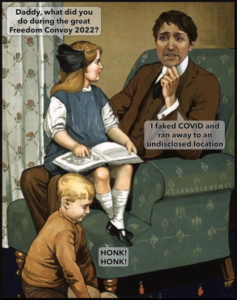 Trevor just posted a comment that is profound in its truth and simplicity.  What exactly do the freedom convoy counter protesters want?  They obviously do not want their rights back.  They are protesting in support of tyranny.  According to the latest data they are also protesting to ensure that everyone gets to die from COVID.

Governments continue to gaslight Canadians by lumping in deaths from when no one was vaccinated to show how effective the vaccines are.  When no one had taken the vaccines they were 95% effective.

Now that everyone has taken them the numbers are drastically different and changing quickly each week. 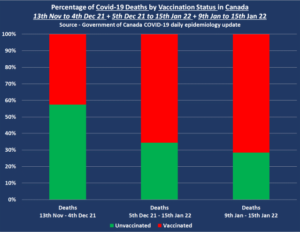 If this trend continues in the next few weeks 100% of COVID deaths will be among the vaccinated.

Anyone supporting our government at this point is either ignorant or evil.  The restrictions do not work and the vaccines increase the number of people who get sick and die. 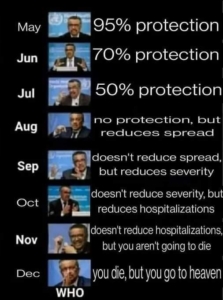 Donald Trump was an outsider.  He did not accumulate his fortune by peddling political favors.  Unlike his predecessors and the rest of the Washington elite, Trump was not there to make money from the system.  This made Trump an existential threat to a cozy system that had made millionaires out of vile and talentless people.  All stops were pulled out to get rid of Donald Trump.  Every weapon at the establishment’s disposal was brought to bear.  The establishment was ultimately successful in removing Trump but in the process they exposed the enormous political and media corruption that exists.

The Freedom Convoy is having the same effect now in Canada.  Truckers and their supports are not part of the corrupt government/media alliance.  They are outsiders who have no desire to be a leech on the Canadian taxpayers.  The Freedom convoy is an existential threat to the system.  If Canadian taxpayers ever learn that the power lies with people and not government, 155 years of accumulated corruption will come crashing down.

The government/media alliance is reacting to the threat the same way they reacted to the threat Donald Trump posed.  They are attacking on all fronts.  The shock troops are always the media.  They get sent in first.  Canadian Media has jumped to the task of painting the protesters as violent terrorists.  This is no small task since there has been no violence and the Truckers are out in force shoveling sidewalks and feeding homeless in Ottawa.

That is not really a problem for Canadian media; they have never been averse to fabricating a story.  First they make Canadians believe there is a large and growing counter protest.

Millions of people across Canada were out protesting the mandates yesterday and the only story worth reporting was a dozen counter protesters?

Next they make you believe that violence between the protesters and counter protesters is inevitable.

The only violence to date has been people harassed for wearing masks?  For 2 years people have been harassed and physically assaulted for not wearing a mask yet somehow that was never reported as violence.  There has been no real violence from any of the freedom convoy protesters but the media is certain that when counter protesters show up there will be violence.  Doesn’t that imply that it will be the counter protesters who initiate the violence?  I sincerely doubt the truckers can be goaded in to violence by the soy boys in the counter protest but again the media does not require truth to construct a narrative.

The media is constructing a false narrative about the protesters being violent terrorists to provide justification for the government to use violence against the freedom convoy.  Several politicians have called for bringing in the military and the Ottawa police Chief has promised to ramp up his own illegal activities.  To make sure his officers fall in line he has threatened them publicly.

Ottawa's police chief says he will investigate any police officer that provides any support to the Freedom Convoy truckers. pic.twitter.com/x89W5VRhAS

Any officer supporting the protest, in any way, will be prosecuted.  Prosecuted for what?  Did the Ottawa police chief just invent the charge of aiding and abetting free speech?

This rhetorical ramp up has not been lost on the protesters.  Here is their lawyer appealing to Canadians for support.

Our Government is playing a dangerous game.  They are getting desperate as they watch their hold on power slip.  They are lashing out now before their snout gets pushed out of the public trough permanently.  They are moving boldly, and illegally, at a time when they should exercise caution.  Support for the truckers is already far more wide spread than they think.  Just ask these 2 Ladies.

Looks like the truckers are going to be here for a long time! It’s amazing. Men and women trucking food across the country to feed Canada‘s heroes. pic.twitter.com/6O3j6lJTcc

Publicly traded companies are required by law to publish their financials after the New Year.  It takes them some time to get their accounting and reports finished so typically companies start to publish their results in February.  A friend of mine sent me this article from zero hedge who have been watching the published results closely.

2021 was a very good year for funeral homes and an unprofitable year for insurance companies.  It seems that an unexpectedly high number of people died last year.

The most interesting thing was not how many died but who died.  In 2020 COVID caused excess deaths in a very specific demographic; elderly people with serious health conditions.  COVID did what all respiratory viruses do.  It hastened the demise of people already on death’s door steps.  My wife’s uncle is a retired nurse.  When this government/media sponsored panic started he told me this is normal.  In his words “pneumonia has always been known as the old man’s friend”.  Pneumonia was a blessing that finally ended the suffering of seriously ill seniors. 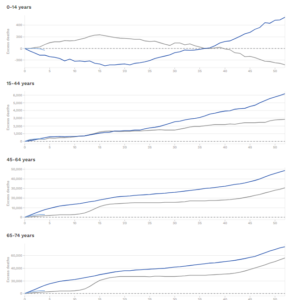 These people are not in COVID’s demographic.  This is the demographic of people who die in war not during cold and flu season.

The sad fact is that we are at war.  We are at war with our own governments who are forcing us to take a treatment that causes young healthy people to die in large numbers.  Right now the only people fighting this war on our behalf are blue collar workers at the Freedom convoy.  White collar workers have had all common sense educated out of them and are still cowering at home behind masks.  It is time for everyone to step up and join the fight.

Beautifully spoken and articulate. I highly recommend you listen to the voice of the ethical and rational. 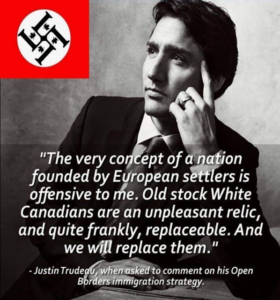 I woke up early this morning and did something I don’t normally do: I turned on a legacy media news program.  The program was CTV’s morning show out of Edmonton.  I don’t know why I bothered.  It took only minutes before I was nauseated.  CTV took the time to do a story about how hard the Freedom Convoy has been on the residents of Ottawa.  CTV explained that some Ottawa Seniors are afraid to leave the house and the isolation has been difficult for them.  Of course CTV did not speak to any of these frightened seniors.  They did not speak to any seniors at all for this blockbuster story about the concerns of seniors.

There is a good reason that CTV did not risk interviewing an actual senior.  They were unlikely to get the answer that they wanted.  I would hazard a guess that most seniors would be a lot more upset about 2 years of enforced isolation due to government tyranny than a 3 days of inconvenience from the Freedom protest.  An inconvenience that was increased by the police preventing so many truckers from approaching parliament and stranding them in other parts of the city. 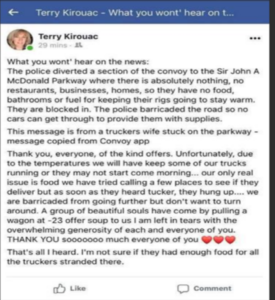 The media is frantically searching for anyway to support the government agenda.  When they aren’t making up fake stories about frightened seniors they are trying to convince the protesters that they have made their point and they should quit while they are ahead.

André Pratte: The longer convoy protesters paralyze Ottawa, the more they damage their cause | National Post

The Media is desperate because the protests are working.  Quebec has backed off on their plan to fine unvaccinated and Jason Kenney in Alberta has a full blown crisis on his hands.  Truckers in Alberta joined the efforts by blocking the Coutts Border crossing.  When the RCMP finally moved the protesters truckers and farmers started blocking highways in southern Alberta.  United Conservative party (UCP) MLAs from southern Alberta negotiated a settlement with the truckers to drop vaccine passports in rural areas.  The UCP executive quickly stepped in to squash that but did it by promising to remove vaccine passports (restriction exemption program) everywhere within days.  Here is their press release.

It is quite telling that this came from the caucus chair and not the Premier.  This could indicate that Alberta Premier Jason Kenney has also gone in to hiding or that the party is pushing him aside.

If governments are forced to drop restrictions both the media and government will find themselves in hot water because nothing will happen.  There will be no surge in infections, hospitalizations, or deaths.  Even the most deeply committed COVIDiots will come to realize what academics have been saying for more than a year now.  The restrictions made no measurable difference.  They only made things worse.  There is a new study from John’s Hopkins that concluded just that.

While this meta-analysis concludes that lockdowns have had little to no public health effects, they have imposed enormous economic and social costs where they have been adopted. In consequence, lockdown policies are ill-founded and should be rejected as a pandemic policy instrument. 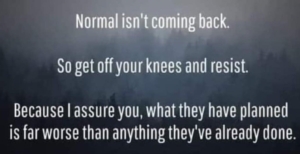 The Freedom Convoy is causing ripples all over Canada and may have claimed its first political casualty.

The Conservative party looks to be poised to give O’Toole the boot.  The rumor is that he will not make it to the end of the week.  It has not been lost on Conservatives that the country is crying for a real leader.  Justin Trudeau has fled the capital causing an even larger void than his presence normally does.  There is a golden opportunity for the conservatives to strike a death blow to the liberals and Erin O’Toole is waiting for Justin Trudeau to tell him what to do. 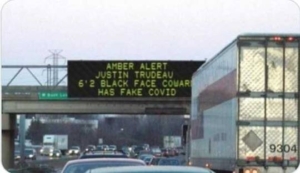 Politically getting rid of a loser like O’Toole is good for Canada but it does not even begin to solve our Problems.  We still have Trudeau and the voter ignorance and apathy that put that moron in power.  Incredibly the Freedom Convoy might even accomplish that.  Since the Start of the Convoy Canadian’s attitudes to the restrictions have changed dramatically.

Canadian attitudes are shifting to living with COVID-19: poll (msn.com)

In only a week there has been a 10 point shift in the number Of Canadians who oppose the restrictions.  We are now the majority.  The Freedom convoy is forcing normally complacent Canadian’s to think and that will not be good for our political class.  Their whole game is built around the assumption that Canadians will ignore what is happening until it is too late.  The truckers have shone a light exactly where government did not want it. 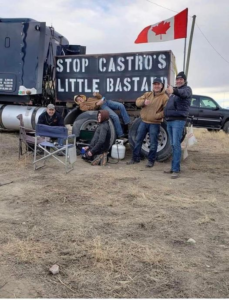