A friend sent me this short Jordan Peterson interview.  I like Jordan Peterson but I do not find him to be the great sage his admirers believe him to be.  I think Jordan often gets things wrong and doesn’t always think things through.  Still he speaks his mind and always pushes back in defense of human rights.  I respect him for that.

True to my expectations Jordan does not hold back and gets most things right.  Please take the time to watch.

Jordan is spot on when he says the government broke the agreement with vaccinated people who were told if they got vaccinated they could go back to normal.  That did not happen and Jordan is now suffering from buyer’s remorse.  This remorse is sure to increase when twice yearly boosters become necessary to keep vaccinated status.

He is also correct when he says our charter of rights and freedoms did not protect our rights.  I also agree that we would have been better off with just British common law tradition but this is where I think he misses the point.  The charter is doing exactly what it was designed to do.  Pierre Elliot Trudeau gave us the charter of rights to eliminate our rights.

The Canadian Charter of rights starts with the weasel worlds that our rights are subject to the reasonable limitations of government.  That single statement negates everything in the document that follows it.  Had we stayed with British common law removing our rights would have been a slow process.  Each Right would need to be eliminated separately with a law debated 3 times in parliament.  By enshrining in the constitution that all rights can be limited by government, rights become simple privileges that can be removed at the whim of government.

There is a reason why Justin Trudeau is a tyrannical communist; his father was a tyrannical communist.  That applies to either man who may have sired him.  Pierre Elliot Trudeau had no interest in individual rights, his only concern was concentrating power in the hands of government.  From that respect the charter of rights really was his crowning achievement.  With one simple document he eliminated individual rights and gave government carte blanche to do whatever they want.

I also disagree with Jordan’s assessment of Pierre as an intellectual.  You hear this a lot in Canada.  My response to that is how smart could he have been if everything he did was wrong?  Canada actually had double digit inflation and unemployment at the same time under Pierre.  Even the best economists struggle to explain how that can happen.  Pierre was smarter than his moronic child but that bar is very low.  Half the monkeys in the world clear it easily.  It is sad that 32% of Canadian adults do not.

The place where Jordan misses the mark by the widest margin is his naïve assessment that COVID policies are just weak politicians carried by the wave of public opinion.  I thought that at first but that assessment falls apart after the first few weeks.  I agree that the initial reaction was understandable.  As Jordan points out the consequence of over reacting to a threat is usually low but at what point does it transition from reaction to deliberate action?  The herd may all run when the first Karen bolts but in the animal kingdom the herd stops running before they all die from exhaustion.

Last year unvaccinated first responders were heroes for handling an imaginary emergency.  This year 70% of Canadians believe that unvaccinated first responders are criminals for prolonging the same fake emergency.  This remarkable turnaround in opinion only came after a relentless government campaign to demonize unvaccinated.  Government will use this poll to justify their actions but they are not reacting to it or following public opinion.  They and their media allies created this public opinion.

Jordan Peterson was absolutely correct when he said that bureaucratic overreach is the number one public health problem right now.  He just failed to connect the dots back to what makes this over reach possible in the first place. 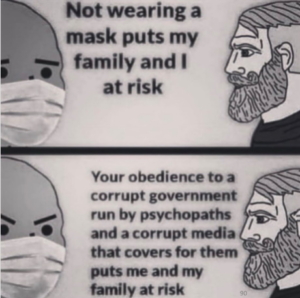