The next few days are pivotal for the health of the world.  The western economies are the largest and most important economies in the world.  All over the west politicians are actively destroying those economies.  They are destroying lives to battle a virus that is not much of a problem anywhere politicians are not intentionally killing people.  There was one notable and very important outlier: Donald Trump.

Love him or hate him Trump was one of the few politicians in the world not talking about the “new normal”.  Trump ran a campaign centered around going back to the old normal.  The central Theme of Joe Biden’s campaign was “we are all going to die”.  Biden maintained that going back to normal would kill us quickly; his “superior” plan is for us to die slowly hiding in our basement watching everything we have worked for disappear.

Right now, it appears people in the US are choosing to die slowly.  The media has successfully convinced people that a 100% guaranteed slow death is far better than the 0.5% risk of a quick death under Trump.  This is not the media’s first rodeo, so they were prepared with a backup plan in case too many people opted for the 99.5% chance at life.  The media convinced everyone that it was too dangerous to vote in person.  To stay safe the government must mail Ballots to every American living, dead, or fictitious.

We are watching that play out now.  Several states stopped counting votes.  What possible reason could they have to do that?  Didn’t they know the volume of votes they had to count?  Why did they not hire enough people to do the job?  There is only one reason to pause counting votes.  They needed time to “find” enough mail in ballots for Joe Biden to negate the lead that Trump had.  The great thing about mail in ballots is that you know exactly how many you need to make your guy win.

Not possible right?  Well there is a peculiar thing about bureaucracies; over time they all tilt left.  The same is true of media.  Conservative or right-wing people do not aspire to careers in government or media.  You do not have many sane people involved in either because they simply do not apply for the jobs in the first place.  Government bureaucracies all over the world are full to the brim with left wing sympathizers.  Who do you think are counting all the votes and making the decision to pause? 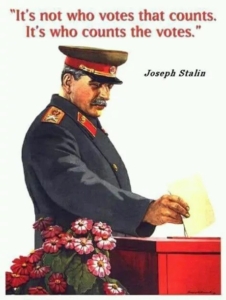 The game is completely rigged in favor of left-wing lunatics; how else do you explain Justin Trudeau, Boris Johnson, Emmanuel Marcon, or Joe Biden?  If needed to hire would you hire any of those men?  You would look at them in their expensive suit listen to their vapid utterances and quickly escort them out with a “don’t call us we will call you”.  Not one of those men is qualified to sell frozen yogurt at a mall kiosk and they are all running countries.

We live in an age were the least qualified individuals have been given the most important jobs.  The US is about to hand power to a creepy, corrupt, mentally incompetent man who has never had a real job.  The American voter and more importantly the American vote counter have opted for mask mandates and lockdowns.  If the US falls completely to this insanity our Prime Moron is prepared to race them to the bottom.

The Chinese say, “may you live in interesting times”.  People often mistake that for well wishing but it is a curse.  We are living in very interesting times now; we are witnessing the collective suicide of western societies.  We are giving up the freedom and affluence that took us centuries to achieve because we are afraid of a virus that has less than a 1% chance of killing us after our 80th birthday.