By the time I reached Ottawa Trudeau had already turned his brown shirts loose on the protesters.  Government enforcers with covered faces, no nametags or identification, some of whom may not have even been Canadian citizens were already trampling and pepper spraying seniors. 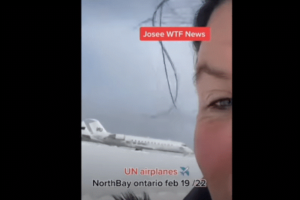 Other people in police uniforms had the entire area around parliament fenced off and locked down. 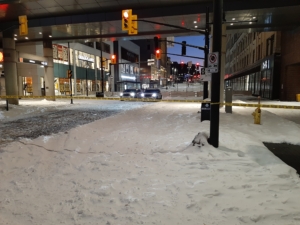 This is Trudeau’s Canada; only the designated elite and their body guard thugs are allowed access to parliament.  Parliament is paid for by the people but it most definitely not for the people.  Inside those fences the elite gathered to vote on the emergency measures act.  An act that was already being used to violate peoples’ rights.

With the support of Jagmeet Singh the vote passed but that does not make it legal.  Here is the language in the act that describes when it can be legally used.

3 For the purposes of this Act, a national emergency is an urgent and critical situation of a temporary nature that

The only lives endangered were the protesters’ lives.  They were as safe as any other Canadian until Justin Trudeau ordered people in police uniforms (not to be confused with actual protect and serve Police officers) to trample protesters with horses.

Trudeau is stamping out freedom. One trampled protester at a time.

There was also no threat to the sovereignty of the country; our governing elite were safely behind the barricades debating how badly they would punish people who did not agree with them.

Not only did the protests not rise to the level of a national emergency as defined by this act, the government’s actions also violated the conditions of the act.  Here is language from the first page of the act.

AND WHEREAS the Governor in Council, in taking such special temporary measures, would be subject to the Canadian Charter of Rights and Freedoms and the Canadian Bill of Rights and must have regard to the International Covenant on Civil and Political Rights, particularly with respect to those fundamental rights that are not to be limited or abridged even in a national emergency;

The act is very clear.  It cannot be used to violate the charter rights of Canadians yet everything the people in police uniforms did violated those rights.  This is Trudeau’s Canada.  The emergency measures act was illegally invoked and then illegally applied.  We now live in a country where any time the Prime Minister is angry or embarrassed he can declare an emergency and throw people in prison.

Unfortunately that isn’t even the most shameful part of this whole fiasco.  The most shameful part is that most Canadian’s don’t see a problem with what the Prime Minister has done.  They think allowing the government to destroy people in the name of “public safety” is perfectly OK.  Their attitude will, no doubt, change dramatically the first day the government determines that they are now the problem.  Useful idiots cease to be useful after the dissidents are dealt with. 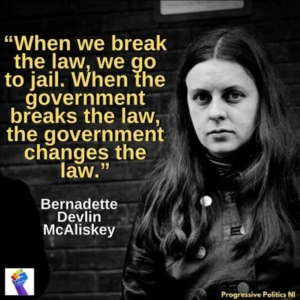