Your feel good video of the day courtesy of the people of Poitiers France.

During a vaccine passport demonstration the town hall was occupied.  The protestors pulled a portrait of French President Emmanuel Macron off the wall.  They stomped on it, tore it to pieces, and threw it down to the cheering crowd.  Macron might be influencing people but he is definitely not winning friends.

Occupying and vandalizing government buildings is not unique to French culture.  It was a popular pass time in the US in 2020.  On January 6th 2021, in the spirit of this new but quaint tradition, disgruntled Americans briefly occupied the capital building.  They tore down no portraits and caused little damage they did not clean up on their own.  This lack of barbaric behavior turned out to be their downfall.  There was simply not enough violence to qualify for the “mostly peaceful protest” exemption.

Dozens of protesters have been in Prison since January 6th and Pervert Joe is using the FBI to hunt down the rest.  This is a very simple task for the FBI since they were intricately involved in planning the protest.  They probably have the passenger lists from the free buses FBI informants provided.

I am sure Macron is very envious of creepy Joe right now.  He would love to send the police out searching for the Poitier protestors.  Thankfully the dwarf tyrant might not have that option.  It is being reported that Macron’s security police have resigned en-masse.

God I hope this is true.  Leftist Tyrants like Macron have been violating basic human rights with impunity for almost 2 years now.  They have gotten away with it because the police have forgotten their oaths to serve and protect.  If the Police turn their backs on tyrants like Macron they are done.

I have a friend who loves history even more than I do.  Since the beginning of this farce he has been warning that politicians have been playing with fire.  History is full examples of how quickly public sentiment can turn.  When these sharp U turns occur they often lead to violence.  I hope Macron is scared senseless and hiding in a closet right now. 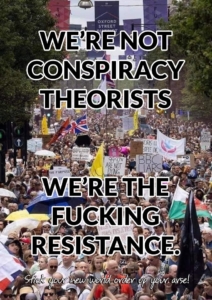