It was easy to see with data available 15 months ago, that the vaccines should not be given to young people yet we did.  Not only did we jab young people we forced them to take it.  They were banned from organized sports and education if they did not.  The people who did this are criminals.

One of the conclusions of the paper is that we should do risk benefits for the Jabs to which I say “no shit Sherlock”.  We jabbed billions of people without any idea if we were doing more harm than good.  That alone is “ethically unjustifiable” but it gets worse than that.  The limited test data we did have strongly indicated the jabs would do more harm than good.

In the Pfizer trials more people died in the vaccine group than in the placebo group.  With Moderna it was a wash; the same number of deaths in both groups.  That data alone indicated that there was no net benefit to vaccinations.  If you couple that with the knowledge of how these treatments work we should have been wary about giving it to anyone.

To start the jabs are not vaccines.  A traditional vaccine uses a weakened or a dead virus to provoke an immune response.  These treatments don’t do either.  They use only a piece of the virus, the spike protein, and for some bizarre reason it was not injected directly.  Instead cells in the body are “reprogrammed” to produce the spike program; something never before done to humans.

Using just the spike protein does not produce a full antibody response or any T-cell response.  That means the protection from the jabs is partial and temporary.  The partial antibody response at best just gives a head start on recovery.  It cannot prevent infection and therefore cannot prevent transmission.  So before the vaccine programs ever started the government had these 3 pieces of information.

If it was up to you, and this is the data you had in hand, would you force people to take the jab?  Would you even approve it for anyone?  Our governments did.  Either our governments are completely populated with idiots.  Which I admit is entirely possible.  Or, this is not about a virus. 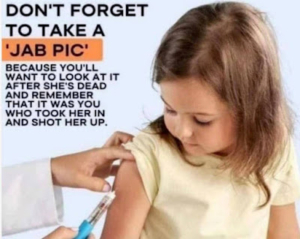 Subscribeto RSS Feed
How do you Defend the Indefensible?The Dam Breaks
Scroll to top