I came across this twitter feed from a rapper named Zuby.

I confess I have no Idea who he is because I do not listen to rap.  Rap music and popular music to me is just mindless drivel.  The performer is selling an image rather than music.  Many performers become rich selling an image.  I do not begrudge them that.  They are selling a product, and no one is forced to buy it.  If they can convince someone to buy their products good for them.

I never listen to Rap because I find rappers to be the worst offenders.  99.9% image 0.1% music.  That causes me to overlook people like Zuby who has something intelligent to say.  The twitter feed I linked contains Zuby’s thoughts about covid which I have reproduced at the bottom of the post.

All Zuby’s thoughts are worth considering.  Many of the points he makes I have discussed on my blog.  Of all the points, the first and the last are the most important.  They perfectly describe how we got here.  Those points I want to discuss briefly.

The first day the mask mandates were dropped my wife and I walked into a store without masks on.  Most people were still wearing masks.  My wife felt very uncomfortable and put her mask on.  My wife is intelligent.  She has seen the data and knows masks do not work.  Still, she is human and felt the pressure to conform.  Those human instincts overrode her intellect and compelled her to re-join the group.  I did not put my mask on so you can judge for yourself what that means about my humanity.

Politicians or at least their handlers understand this piece of human behavior.  They do not just understand it.  They use it to manipulate us.  When they get the herd moving, they can keep it moving.  All they must do is to mop up the mask-less stragglers.

Politicians are evil Bastards.  I know this.  I accept this but most people cannot.  I have a friend that I work with.  We have daily conversations about how easily people are accepting this Tyranny.  Ever conversation ends in the same conclusion.  Politicians are knowingly harming people for their own selfish reasons.  My friend always shakes his head and tells me he understands what is happening, but he just does not understand how politicians can do this.

Politicians do what they do because they are sociopaths.  They are incapable of empathy.  To them something is good if it is good for them personally.  If others are harmed by this, they simply do not care.  My friend cannot understand this because he is not a sociopath.

I am glad my friend struggles to understand this.  I would hate to think I have befriended a sociopath.  My friend need not be concerned with how he thinks.  He should be very concerned with who he picks as friends because I understand all of this.  Again, I will leave it up to you to decide what that says about me.

Zuby correctly points out that people have a strong need to belong and that most people are not sociopaths.  They simply refuse to believe that politicians are evil.  This makes humans extremely manipulatable.  Politicians know that people will not question their motives.  Especially if they can be convinced political actions are good for the herd.

If humans were less human, we never would have allowed our rights to be stripped away so easily.  The first thing we would do is question politicians.  We would never have willingly followed people of such obviously low moral fiber.  That dear friend is the story of COVID in a nutshell.  Humans being human, and sociopaths exploiting them.  It should not have taken a rapper to explain it. 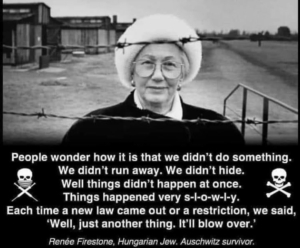