A federal judge in the US has struck down mask mandates for travel.  People on airplanes and buses no longer need to wear masks.  Immediately the media pointed out that Donald Trump had appointed this judge.  With the media when the left gets what they want it is science but when the right prevails it is dangerous right wing extremism.

The science is clear masks do not prevent the spread of airborne respiratory viruses but this is not what influenced the judge’s decision.  The Judge ruled that the mandate overstepped the law.

The law says the agency may take such measures as it deems “necessary,” and provides a list of examples, like “sanitation.” The judge wrote that this power was limited to things like cleaning property — not requiring people to take hygienic steps.

Of course this ruling caused hysterical fits among the left who are worried about bureaucrats losing their power.  This is the fundamental difference between liberals and conservatives.  Liberals believe that the power should reside with unelected technocrats like Rochelle Walensky and that it is a judge’s responsibility to confer as much power on them as possible.  Conservatives, on the other hand, believe people have the power and elected officials are supposed use the bureaucracy to enact the will of the people.  Judges should not confer power on anyone.  A judge’ job is to interpret existing laws as narrowly as possible, just as this Trump appointed Judge did.

When a conservative judge narrowly interprets a law the politicians are forced to act.  If the Biden administration wants a mask mandate they must draft a new law that allows one.  A judge will then makes sure that the new law is consistent with existing law i.e. the constitution.  When the system works this way no single person or entity has the power to just do what they want, and elected officials make the law.

The left abhors this model of government.  Most of what liberals want cannot stand up to scrutiny and debate.  The last thing the left wants is for anyone to see what they are doing until after it is done.  That is why the left much prefers Judges to constantly broaden the interpretation of laws.  That way they get what they want without any debate or vote.

There are many examples of this in Canada, the best one that comes to mind is assisted suicide.  The left wanted assisted suicide but they knew it was a contentious issue that might not pass a vote in parliament.  That did not matter because the left does not rely on parliament to do their dirty work; they have a much more reliable partner in the judiciary.  Groups supporting assisted suicide financed a challenge in the supreme court and a lunatic left judge, unfortunately the only kind we have in Canada, ruled that assisted suicide was covered by the charter of rights.

I have no opinion on whether we should or should not have assisted suicide but I strongly disagree with how we got it.  No sane, rational, person can read the charter of rights and conclude that the law covers assisted suicide.  The mental gymnastics the Supreme Court went through to somehow find this in the Charter is worthy of a gold medal.  This decision is especially galling when you consider what has happened to our Charter rights for the last 2 years.

Canadian Judges somehow found assisted suicide in the text of the charter yet they now cannot find Freedom of speech, association, or movement.  Neither can they find the right to equal treatment under the law.  All of these “freedoms” are expressed in clear language in the Charter but somehow they don’t count.  You can ask the government to inject you with a lethal toxin but you cannot prevent the government from injecting you with a potentially lethal mRNA vaccine.

That is the problem with appointing left leaning liberal judges.  When you have liberal judges laws are not worth the paper they are written on.  Our Charter has certainly been worthless in protecting us from government tyranny.  Canada succumbed to the left long ago.  Canadians are powerless.  Voters can change the government but they cannot change the decisions because the decisions are not made by government.

Although there are still pockets of resistance in the US, like this Trump appointed Judge, I don’t hold out much hope.  The levers of power in the US are also firmly in the grasp of bureaucrats.  The plandemic and 2020 election have made that painfully clear.  Joe Biden was installed as a figurehead and obviously is not the one in charge.  I don’t know who is in charge but there is a hierarchy.  Jen Psaki is allowed to answer questions and Joe Biden is not so Jen is more powerful than Joe.  I am not sure if Biden is even on the hierarchy.  If he is he is below the Easter bunny. 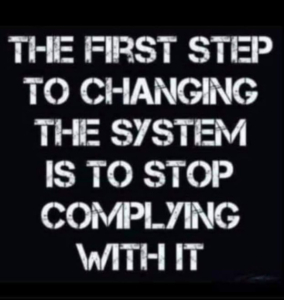 Subscribeto RSS Feed
Politics makes strange bedfellows, the media now likes Jason KenneyDo not let them get away with what they have done.
Scroll to top