The most dangerous woman in Alberta is up to her old tricks.

You can read the article here.

Deena Hinshaw wants you to believe removing the restrictions on July 1st led us to the problems in mid-September.  Sorry Deena but the dates just don’t work.  The % positivity in Alberta started to increase on July 14th.  That is close but not close enough.  The virus has a 4 to 5 day incubation period.  If removing the restrictions caused this we should have seen cases start increasing a week earlier.

At no time in the interview does Deena attempt to explain how this could happen when 80% of adults and teenagers in Alberta are already vaccinated.  She does state unequivocally that Vaccine passports work and she would like to see them implemented.  According to the top doctor in the province vaccines don’t work without government issued documentation.

The Elephant in the room is, of course, ADE.  Vaccinated people are now getting sick and the timing was very predictable.  ADE sets in 4 to 6 months after vaccination.  Alberta started giving the second Jab in high numbers on June 1st, 3.5 months ago.

Onset of ADE is less predictable than the virus incubation period which can be measured in the lab.  I am not going to quibble over 2 weeks especially when Canada did not follow the vaccine instructions and had far more than the recommended time between 1st and 2nd jabs.  The timing is also identical to BC who did not change restrictions on July 1st.  BC started the 2nd jabs at the same time as Alberta and their cases started increasing, almost to the day, at the same time as Alberta.

The Obvious cause of our problems are the Jabs.  Deena’s solution is to carry around a piece of paper that proves you are part of the problem.  Is she that Stupid or that Evil?

Deena Hinshaw has a medical degree.  That boggles my mind.  I know a few doctors.  None are as dense as Deena.  The average person on the street is not as stupid as Deena.  I can think of 3 explanations for Deena’s lack of medical acumen and common sense.

The Most likely explanations are A and C.  I am going to go with C, since she honestly seems to believe the crap that comes out of her mouth.  Also a traumatic brain injury can cause the personality traits in explanation A.  Deena Hinshaw needs some sort of therapy and Albertans desperately need to get rid of her.  Our nightmare won’t end otherwise. 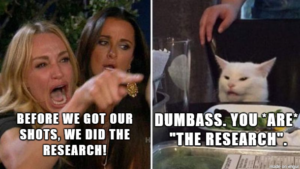 Subscribeto RSS Feed
Are you Tired of the Government Lying about the Vaccines Yet?Jason Kenney is Evil and Alberta’s Worst Mistake
Scroll to top