Even before vaccinations began there were real experts warning that it would lead to vaccine resistant variants.  We were making 2 fatal mistakes.

Vaccination programs should have begun in the summer not the winter when the virus was spreading freely through the population.  Anyone Vaccinated in the winter was likely to encounter the virus before the vaccine was fully effective.  This means the virus would have time to mutate and find a way around the vaccine.

The COVID Vaccines are not Vaccines.  That cannot be said enough.  They do not provide full immunity.  You can still get infected.  Once you do, again the virus will have time to mutate.  Only the mutations that are unaffected by the vaccine will survive and those are the ones you will spread.

Unfortunately the media made sure that the people issuing these warnings were just voices in the wilderness.  They simply were not the kind of “experts” the media turns to.  The media never interviews real experts.  Real experts know what they are talking about and therefore can’t be trusted to stay on script.  The Media prefers experts like this guy. 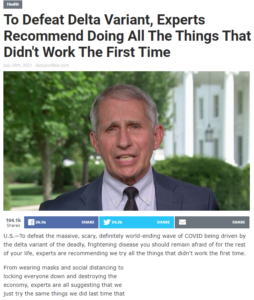 Someone who they can count on to further the narrative with lies.

The narrative in this case is that without vaccines and vaccine passports, extinction is imminent.  Despite being repeatedly splashed across news screens, this failed to frighten everyone.  Many chose not to be vaccinated.  Unvaccinated people threaten the narrative.  If they survive, the vaccine house of cards comes crashing down.  So, like the virus, the narrative had to mutate to stay alive.  The Narrative now is that the vaccines can only work if everyone gets vaccinated.

It is bizarre that anyone actually believes this.  It is like saying if someone in another car does not wear their seatbelt your life is in danger.  You may as well not wear your seatbelt.  We all must wear seatbelts or no one can benefit from a seatbelt.

Politicians use this tactic all they time.  Violence goes up it is because of guns.  A nice simple answer that no one needs to think about.  It also has a very simple solution, take away guns.  Anyone inclined to think knows this is stupid.  There is no correlation between levels of gun ownership and violence.  History also shows this can’t be true.  Societies that existed before the invention of guns were far more violent than our modern gun owning society.

So the simple answer to variants is that misguided people will not trust the government and get vaccinated.  If that were true than it is really hard to explain this plot. 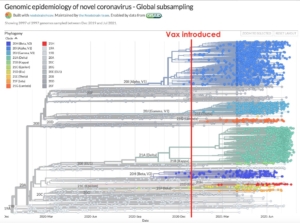 Since the start of vaccination programs the number of Variants has exploded.

Correlation is not causation.  That is something you may have read on this blog before.  Just because 2 things are happening at the same time does not necessarily mean that one thing is causing another.  You can argue that it is a coincidence.  The explosion of variants is unrelated to the Vaccines.  I could accept that argument if you could explain the following to me. 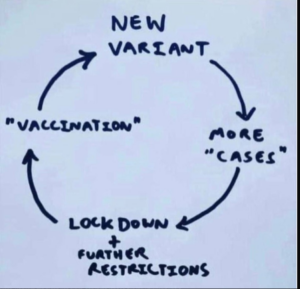 Subscribeto RSS Feed
Yearly Toxic Injections or Vitamin D supplements, I know which one I would ...OMG you Must Watch This Video
Scroll to top