This is what Vaccines have done for the province of Alberta. 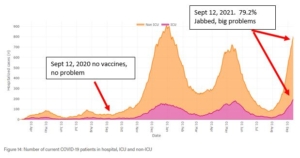 First we were told that the vaccines would prevent infection.  This was an obvious lie because even the Vaccine makers did not claim that.  Then, when it was apparent that people were getting sick, they trotted out the backup lie; vaccinated people would become less ill.  If that were the case why are they filling up the hospitals?  Not only that but we have more hospitalizations per new case than last year.  Las year we had 3 people in the ICU for every 100 new cases.  This year it is 12.  Vaccines have made infections 400% worse.

This will be blamed on the unvaccinated.  No attempt will be made to explain why things get worse as more people get jabbed.  Why bother?  People have short memories.  Most can’t even remember what it was like to have rights.  The solution to this problem is simple. 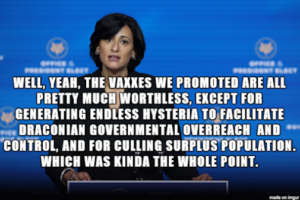