At any time prior to 2019 if you predicted the government would someday round up children for medical experiments you would have been called insane.  How times have changed.  Australia is now started rounding up children to administer experimental injections.  Their parents are not allowed to attend.

24,000 children were removed from their parents care and vaccinated at a separate location.  2 of them have already died.

As of yesterday only 971 people in all of Australia have died of COVID.  I could not find age demographics but, based on demographics in other jurisdictions, I doubt that any children died.  I can all but guarantee no healthy person under 20 has died.  Now 2 out of 24,000 healthy children have died within the first day of vaccinations.  With adults mysterious deaths continue to happen for weeks after inoculation.  Most of the deaths have happened after the second jab.  That means far more children will die.

Vaccine proponents will maintain that the treatments will save far more than they kill.  This is definitely not true for young people.  As I pointed out using Israeli numbers the vaccine is far more deadly to young people than the virus.  The numbers are clear, there is no good reason to vaccinate healthy young people.

Increasingly the numbers are showing that there is no good reason to vaccinate anyone.  We only need to look at Australia’s numbers again.  As of Aug 18th 40% of Australians have received at least one dose.  420 vaccine deaths have been reported.  That is one death per 24,276 people.  971 COVID deaths is 1 death per 26,454 people.  Per capita vaccine deaths are 9% higher than COVID deaths.

The government has incentive to lie about the numbers.  Governments lie just as a matter of course.  When they have reason to lie what do you think the odds of truth are?  I have seen multiple articles recently of young athletes dropping dead during practice.  Most of these athletes would not have been able to participate unless they were vaccinated.  The reporter was very careful not to connect the dots between vaccination and the mysterious abrupt death.

Previously I have posted data out of Canada showing that the 2019/20 winter was not quite as bad as the 2017/18 winter.  Despite being in the middle of the great plague of the 21st century total deaths were completely normal.  The people who die from COVID are already on deaths doorstep.  If COVID does not kill them influenza or pneumonia will.

Obviously the Australian government was unhappy with the number of COVID deaths.  They were apparently far too low.  The government is now taking a more active role and killing people directly with chemicals.  They are also using this bizarre ritual to divide us.  Now parents are offering their children as tribute.  Isn’t this the plot from the Hunger Games? 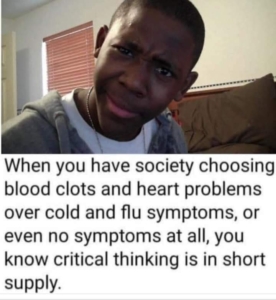 Subscribeto RSS Feed
First we had New Math, Now with COVID we have New SciencePrime Minister Trudeau is Concerned about Rights, Just not our Rights
Scroll to top