Australia has started to remove people from their homes to COVID concentration camps.

AUSTRALIA – The army is now transferring positive Covid cases and contacts in the Northern Territories to ‘Quarantine Camps’ by army truck.

So it wasn’t a conspiracy theory then. #COVID19 #Australia pic.twitter.com/NfJzqrO1fz

This is insane.  Not only are you imprisoning people for the crime of getting sick but this is a seasonal virus and summer is coming. 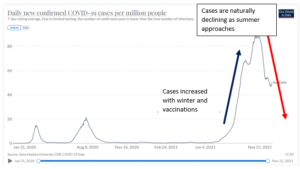 My guess is that it is a little bit of both.  We have seen without exception that cases surge after vaccination programs begin.  Australia started giving second doses in June, cases exploded in July.  This fits the pattern so vaccines are a contributing cause but I believe the lockdowns are the bigger problem.

There was simply a lot of fresh meet for the virus in Australia.  Very few people had been exposed to the virus.  Prior to winter (remember Australia is in the southern hemisphere so their winter starts when our summer does) only 0.1% of Australians had been infected.  For more than a year their low infection rate was heralded as an example of how effective a harsh lockdown could be.  Australia was to be emulated.  Keep your population locked down until we have a vaccine.  Well now Australia has a vaccine and a lockdown, how well has that worked?

When lockdowns started I asked the question, what is the end game?  Even if they work the virus is still out there.  Sooner or later you will be exposed to it.  I had many people tell me that we must lockdown until we have a vaccine.  I told them that was a terrible idea.  You may as well say we need to be locked down until we colonize Mars.  It would be the same thing.  Your end game was an outcome that may never happen.

We are now 20 months in and we still don’t have a vaccine, not one that works anyway.  We will probably never have a vaccine; as Dr. Chetty pointed out there has never been a successful vaccine for any RNA virus.  Clearly vaccines and lockdowns have not worked.  We should be changing course.  Instead Australia is accelerating down the same destructive path.

Do you want to know how incredibly insane Australia’s quarantine camps are?  Even after their worst winter so far not even 1% of Australians have been infected and only 0.007% have died of Covid. 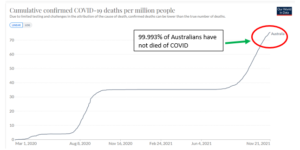 Australia is imprisoning people to stop the spread of a virus that has killed almost no one.  A virus that won’t spread easily in the summer anyway.  This is so not about a virus.