In the “second wave” of Covid we are told that more young people are now getting infected.  We are supposed to infer this means more young people are going to die.  You certainly can’t see this in Alberta’s numbers where the average age of a covid fatality is still 82 and only 15 people under the age of 60 have died with Covid.  Again when I discuss Alberta I have to say with rather than from because Alberta has no excess deaths.  It does not appear that anyone in Alberta has died from covid.

Lockdown and mask proponents will tell you that those measures have saved lives and now that younger people are recklessly moving around unmasked, deaths of young people will surly follow.  To test this hypothesis I turn again to Sweden.  Sweden did not mandate masks or prevent people from moving about.  The Virus was able to move through the population so if young people were going to die from the virus it surely would have happened in Sweden.

It is easy to see why we could not use this plan in Canada.  After all we have twice elected the least intelligent person to ever run a G8 economy.  Rule 2 is far beyond our reach.

The Swedes keep meticulous records so I was able to find daily deaths by age group.  This was great because I could look at trends.  If the virus was dangerous to young people the trend should show a flat or even increasing percentage of young deaths as the oldest and sickest would die early on and you can’t die twice.  The trend should then be flat or down for the oldest age groups.  What I found was the exact opposite.  The trends are below. 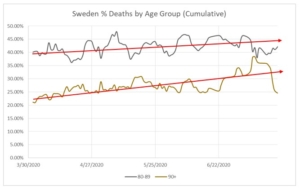 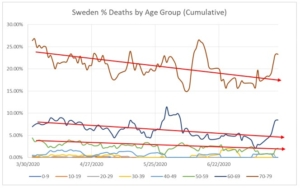 Like everything else the bed wetting left and the media tell us the truth is the exact opposite.  The % of deaths declined for every age group except the very oldest, 80 and above.  With time Covid 19 became exclusively a problem for people over 80.  I have ended the plot at the beginning of July because by July so few Swedes were dying with covid that a death in any age group skewed the average so much that you can no longer see a trend.

By July very few Swedes were dying with Covid.  Now in October no one is dying of Covid.  The outbreak in Sweden started only 10 days before it started in Canada and it was over by July.  What were we doing in July?  I remember now, we were standing back impotently while the preening purple peacock was cancelling Stampede.

In 2013 the stampede grounds were underwater 2 weeks before the stampede.  Calgarians rallied around the cry of come hell or high water and pulled off a great stampede; God could not cancel the Stampede.  In 2020 a man, so useless that the only real job he has ever had was teaching people how not to make a profit, succeeded where God could not.  I guess the real reason Calgary stopped putting fluoride in the drinking water is so that they could use the equipment to add testosterone inhibitors.

The outbreak is now over in Sweden which is clearly illustrated by this plot. 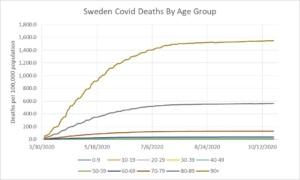 Deaths across every age group are flat and have been since July.  Take a close look at the plot, the highest mortality was in the oldest group 90+.  There were 1,550 deaths per 100,000 people over 90, 1.55%.  That means 98.45% of Swedes over 90 were too tough for the covid virus.  And they did this without masks or hiding from their families.

In Canada we are told ad nauseam that if we went anywhere near our older relatives without taking the prescribed precautions we would surely kill them.  The media and government desperately want us to believe that anything other than 100% compliance to every ridiculous edict is a death sentence for our Grandparents.  Compared to 90 year old Swedes, Canadians must be a very frail group.  It is a good thing we don’t have gangs of 90 year old swedes roaming the streets in Canada victimizing the cowering masses hiding behind their masks.

Subscribeto RSS Feed
It is Halloween, Go Ahead and Wear Your MaskLockdowns Are Evil, is That Why Politicians Love them?
Scroll to top