Yesterday a friend of mine sent me a video that supposedly was a phone conversation between a UK woman and her doctor.  The woman was doing a phone consult over a vaccine injury she had suffered.  She did not know if she should get her next dose.  Incredibly the doctor advised her not to take any more vaccines because new information is out and the vaccines would soon be banned.  This was my response to him yesterday.

I think there are 3 possibilities

Of the 3 the last one is most likely.  The vaccines will not be pulled.  The information will be suppressed and doctors will be threatened.

Today my assessment would be different.  Now I think the call is definitely real and that the vaccines are about to be pulled.  I have one very strong reason to believe that the call was real.  The video has already been pulled from twitter.  Twitter only targets accurate information.  If the call was fake it would still be on their site.

But the call could be real and the nonsense could continue so why do I now believe that the vaccines will be pulled?  Well this morning I found this article.

The Rumor in the UK is that all COVID restrictions will end in 10 days.  Again the media reaction to this rumor is what leads me to believe that it is true.  The Journalist took the time to find “experts” to panic over the prospect of freedom.  The Paper would not have done this unless they were concerned.  In fact if they thought they could ignore it they would not have even printed the article.

The obvious question is why now?  COVID has been over in the UK for almost a year and yet the restrictions are still in place. 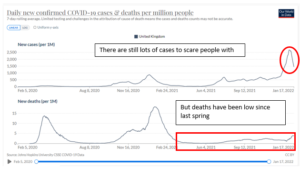 The answer, of course, is politics.  COVID has never been a public health emergency it has always been pure tyrannical politics.  The only reason anything is going to change is because Boris is still in political hot water over his lockdown violating booze fests at 10 Downing Street.

This is not a new problem.  It first surfaced before Christmas when other European countries were openly musing about vaccine mandates.  Boris made statements indicating Britain would not invoke mandates and suddenly parties that had been going on for months became front page news.  At the time it seemed to work.  Boris started to sing from the approved COVID songbook.  Suddenly even though vaccine mandates violate British common law they might happen anyway.

Boris thought the problem was solved but he was wrong.  The COVID hoaxers were pacified but his own government was not.  Dissenting members of his own party are threatening to bring down the government.  Boris is being forced to flip flop again to hold on to his cushy job.  Lockdowns could be ending not because they are a destructive failure but because it is politically expedient for Boris to end them.

This next 2 weeks could be pivotal.  Britain is an important country; the 5th largest economy in the world and a nuclear power.  If Britain drops the COVID insanity it will be difficult for media elsewhere to ignore them.  Sweden is small and easy to ignore, Britain is not.

To be clear I don’t expect the vaccines to be banned.  They cannot admit to a mistake that has taken so many lives.  I expect that the vaccine passports will be dropped.  Vaccines will still be available but the coercion will be gone.  That is still enough to unravel this farce.  The point of the last 2 years has been the vaccine passport.  If Boris is forced to drop them the game is over.  Who could have guessed that Boris’s drunken antics would be what would save us from COVID? 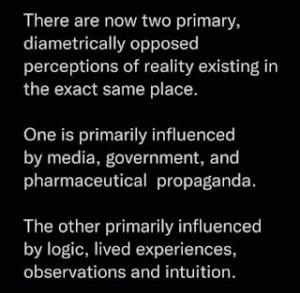 Subscribeto RSS Feed
Media outside Canada are distancing themselves from the COVID Narrative.Britain goes one way Canada goes another
Scroll to top