This week Joe Biden stopped his speech to search for a dead woman.

Joe Biden asks around the audience to point out "Jackie" during a conference on hunger, nutrition, and health.

Is he referring to Republican Representative Jackie Walorski, who passed away in a car accident in early August? pic.twitter.com/pSRkQLQJYU

Then later that day he got lost in a room full of people.

Biden wanders away from the podium as FEMA Administrator Deanne Criswell attempts to lead him in another direction. pic.twitter.com/2G3OKlsog7

Can we finally stop pretending that he is in charge?  Even when he was young Joe Biden never had the cognitive ability to be president.  In his prime he rivaled Trudeau for sheer stupidity.  Joe is no longer in his prime.  Let’s be honest Joe is senile.  He has no idea where he is most of the time.  He is obviously not the one running the country.

While we are being honest can we finally dispense with the fiction that Joe Biden got more votes than any president in history?  Joe Biden did not get 80 million votes.  If you were asked by the UN to be an election observer in a third world country and you witnessed or found;

Every one of these things was documented in the 2020 US presidential election.  The election was a sham, everyone knows that and no one says anything about it.  This was a coordinated effort and it amounted to a coup.

We live in a bizarre times.  A group of unidentified people engineered a coup on the most powerful nation the earth has ever seen.  They did not even try to hide what they did and we all accepted it.  This group, whoever they are, installed a senile puppet and everyone acts like this is the most normal thing in the world.  How far are we willing to take this fiction?  Will we go to war with Russia, a nation Joe Biden can’t even find on a map? 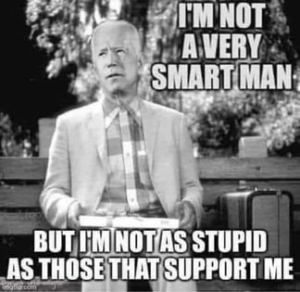 Subscribeto RSS Feed
Justin Trudeau is extraordinary, but not in a Good WayThe 3 Horsemen of the COVID apocalypse
Scroll to top