The Trudeau government has an intense hatred of pipelines and Albertans.   That’s why on February 17th, 3 days after the emergency declaration, anti-pipeline activists were allowed to violently protest the construction of the coastal gas slink pipeline.  The protesters attacked and threatened workers with axes before using the axes to destroy expensive equipment.  No arrests were made, no bank accounts seized, not even a single senior citizen was trampled by a police horse.  These protesters were useful idiots doing exactly what the Trudeau government wanted so their violence had no consequences.

The Canadian government is at war with their citizens; not all of their citizens jut the fringe minority with unacceptable beliefs.  The most unacceptable belief in Canada is rule of law. Rule of law is an ancient belief not seen in Canada for quite some time yet some lunatics still cling to it.  These people believe that honking a horn is not a crime but assault with an axe is.

Man are they misguided.  How many more seniors need to be trampled before they understand?  It does not matter that you honk a horn or strike with an axe.  All that matters is who you honk at and who you assault.  The recipient determines whether or not it is a crime.  People who agree with the government are protected; people who disagree are not.

Canada’s transition away from rule of law has certainly changed the nature of policing.  Their sole responsibility is now protecting the government.  Protecting the public is no longer in their job description.  Of course the police did have a choice in all of this but in Trudeau’s dirty little war the police have chosen to side with totalitarianism.

There was a time when I backed police; those days are over.  Now I am not just solidly in the defund police movement, I am in favor of disbanding the police completely.  We would be better off with no police than to have these uniformed sociopaths. 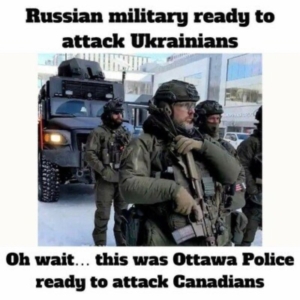