5 weeks ago, Stats-can put out a report saying in the first 51 weeks of 2020 Canada saw 13,500 excess deaths.  At the time I expressed my skepticism.  Based on the last 10 years of data, StatsCan had underestimated the number of expected deaths.  They had also adjusted the death numbers higher than I thought was justified.

The death numbers are always low, especially in the most recent weeks, due to late reporting.  I always adjust them up before using them, as did StatsCan when they published their report.  StatsCan publishes death statistics every 5 weeks.  So how does the current release compare with the numbers StatsCan adjusted up 5 weeks ago.  See the plot below. 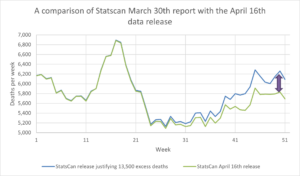 StatsCan just released data that is significantly lower than the data they used to produce the scary 13,500 excess death report.  This is exactly what I predicted in my post.  After generating the headlines that the Prime Moron wanted, StatsCan adjusted the totals down.

On the same day that StatsCan published their paper I posted that Canada had about 7,400 excess deaths based on how I had adjusted the death estimates.  So how did my estimate compare to the April 16th release?  I was low by 0.007%. 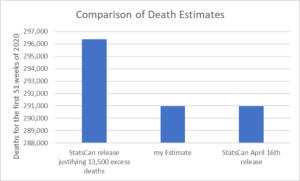 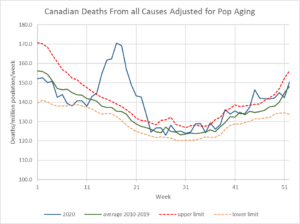 From week 33 to week 50 Canada had above average deaths but only one week in October was outside the bounds of normal.  So, if we look at our official COVID deaths then we must conclude the following. 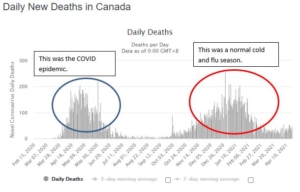 Canada has had very few excess deaths since mid-June 2020.  Canada is a large country so not every part of the country is like this.  In Alberta there were no excess deaths until this season and now we have significant excess deaths.  That means that some parts of Canada are experiencing lower than normal deaths right now.

The Covid epidemic essentially ended in Canada 10 months ago.  So, why are we under martial law?  Martial law has not yet been declared but 4 provinces are now closing their borders.  You must apply for permission to enter New Brunswick.  Effectively New Brunswick is issuing visitor visas to Canadian citizens.  Was I napping when New Brunswick issued their declaration of independence?  If New Brunswick is now its own country, can we stop sending them equalization payments?

What is going on in Canada right now is insane.  The Premiers are carving out their little Fiefdoms and are ruling like dictators.  Some like Alberta’s evil troll are acting as if they never have to seek re-election.  There are only 2 reasons they would do this.

I do not know about you, but either of those explanations scare the shit out of me.  Both mean that the lockdowns will never end.  We will never get back the rights that we rushed to give up.  The country is splitting up and turning in to 10 different Venezuela.  These evil Tyrants need to be stopped and removed from our country while we still have one. 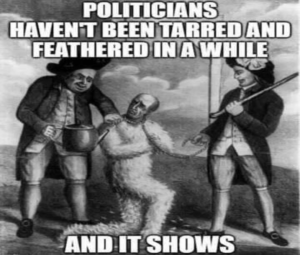 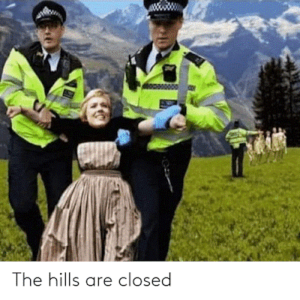