It has begun.  Just yesterday I wrote that the government will achieve vaccinations by blaming any new variant on the unvaccinated.  Now we have this from Toronto.

.@epdevilla: "The more people we have who are unvaccinated, the likelier it becomes that a new variant will develop – potentially with the ability to threaten the protection we’ve got against COVID-19 – and all the progress we’re making towards reopening." pic.twitter.com/DuBFksvvmO

The Government is conditioning people to be fearful of, and angry with, unvaccinated citizens.  They will keep up this propaganda until next cold and flu season when vaccinated people begin to get sick. 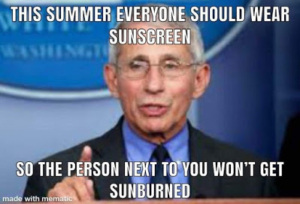 Make no mistake this will result in unvaccinated people getting fired.  I know a young woman who got hired under a program like this.  The government would pay 50% of the wages if a business would hire a new grade.  The subsidy lasted for 12 months.  On her 1 year anniversary she was laid off to make room for another new subsidized new grad.

I can guarantee you that businesses will demand to know the vaccination status of their employees.  Unvaccinated will be laid off to take advantage of the subsidies.  Unvaccinated people will be relegated to unemployment until they conform.  What do you want to bet the next announcement will be of a 2 tiered unemployment insurance program?

There is something seriously wrong with Canada and Canadians.  We are headed down the road of complete government control.  The government will control your income and soon your body.  I weep for my country.

Canadians are idly watching some of the worst people our country has every produced destroy one of the best countries every created. There are virtually no public figures in Canada speaking out against this.  Most are cheering it on.  We are doomed, thankfully there is some hope left in Australia.  This is a video of an Australian politician pointing out that the vaccines are not as advertised.

Politicians, like all men, "only recover their senses slowly, and one by one". [Charles Mackay]. Queensland Senator Malcolm Roberts @MRobertsQLD drops a few COVID-19 vaccine truthbombs. Inevitably vilified by his MSM fact checkers so ticks the fortitude box too. pic.twitter.com/jOsBZnh0Sz

Why can’t Canada produce a single “leader” with that much honesty and intelligence?