This video is incredible.  The government of Ontario is ignoring a court judgement.

In 3 days, they will start stage 3 of their re-open plan.  What is stage three of a reopening plan for an illegal lockdown?  Asking for a friend.

Ontario, like every other jurisdiction in Canada, based their re-open plan on vaccination targets.  So, in Ontario this is the way it works.  The illegal restrictions will only be lifted if people accept the vaccines.  You must consent to being injected with chemicals before the government will stop breaking the law?

What the hell has happened to Canada?  Why isn’t the media all over this?  I thought they hated Doug Ford.  Why have they overlooked his lawless behavior for 5 weeks?  The answer is simple.  The Media hates you and your freedom more than it hates Doug Ford.

When justice final comes, we need to reserve prison space for a lot of journalists.  They should be quite comfortable with all their government friends.

Thankfully, a few journalists are not willing to support tyranny so unconditionally.  This Sky news anchor does a very nice job of calling out his government. 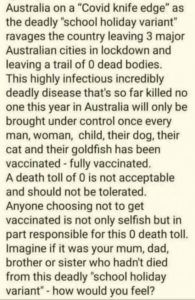