Until this morning I had a very favorable impression of Canadian Tire.  I have spent thousands if not 10s of thousands in Canadian Tire over the years.  I made another substantial purchase less than 1 week ago.  I was a very happy customer and then I saw this video.

This is unbelievably unacceptable behavior from @CanadianTire employees who took matters into their own hands forcefully assaulting and “arresting” a customer for not wearing a mask!

Stay tuned for my exclusive interview with Chris.

When I first saw the video my response was very visceral.  I was seething with anger and I was going to demand that Canadian tire fire these employees.  Then I went outside to chop wood.  While I was chopping wood I realized I did not know the context around this video.  Many people have had their reputations smeared over things taken out of context and posted on the internet.

The person who posted this video says this was over a mask.  Unfortunately we do not see what preceded the confrontation so I can’t be certain this was over a mask.  I was, however, shocked to see that a Canadian Tire employee brings his own handcuffs to work.  Really what kind of neighborhood is this store in?  One thing that is certain is that Canadian tire has a lot of explaining to do.

If this really was over a mask then I will not spend another cent in Canadian tire until they do the following.

This shit really has to stop.  The government has ramped fear up to the point of irrationality.  If this maskless man really could spread covid why is it safe to wrestle with him?  Why did these employees feel that they had no other option other than assault this man?  Our governments are intentionally demonizing political opponents and turning neighbor against neighbor.

To distract from their own malfeasance governments have opened Pandora’s Box.  There is absolutely no way this can end well.  Unfortunately we have been to this movie before and the ending was horrifying.  2 weeks ago Gina Carano was fired for tweeting this. 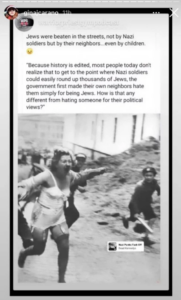 All Gina did was point out that the Nazis did not start out marching Jews into the gas chambers and ovens.  They started by demonizing them.  They created an atmosphere in which attacking Jews on the street was acceptable.  4 Days ago the ultimate Soy Boy Jason Kenney went on national TV to tell us people who disagree with his covid policies are Nazis and racists.  Jason made it OK to attack maskless people.  Now we have people being attacked for shopping in Canadian Tire.  How long before we start rounding up dissenters and sending them to the showers?

Subscribeto RSS Feed
Tyrants never Relinquish power.Israel is Issuing Vaccination Passports for a Vaccine they did not Need
Scroll to top