I had a Friend Ask me why we are not seeing the same problems as England and Israel.  That is a very good question.  How can I claim that the vaccines are causing so much trouble when we don’t see any problems in Canada?  My answer is that right now the problems are obscured by government incompetence.

The Canadian government and senior bureaucracy are incompetent.  The highest levels of both are staffed with people who have only one skill.  That skill is the willingness to lie.  The only industry that values that skill is Government.  Career advancement varies inversely with truthfulness.  You don’t need to be a good liar just a consistent one.  Remember it was government that said “a lie repeated often enough will be accepted as the truth”.  It is the consistency of the lie that maters not the quality.  That is why we pay carbon taxes.

This government incompetence helps hide the problem in 2 ways.  Timing and data quality.  Right now timing is the big one.  The Trudeau government took months to figure out you can’t just talk about vaccinating people.  Someone needs to go out and buy the vaccines before you can use them.  The result of their childish planning is that Canadians were vaccinated about 2 months after England and 4 months after Israel.  The problems England is seeing now we will see in December.  Problems Israel is seeing now will manifest in Canada around February. 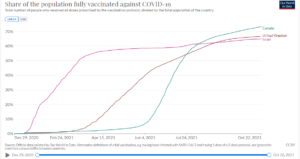 Our Procurement problems means that Canadians are still in the Vaccine honeymoon period.  That is the 4 to 6 month period when the vaccines work and ADE has not yet surfaced.  Even though we are in the honeymoon the signs are already pointing to problems.  By Aug 15th most people had received their second Jab.  At that time only 24 % of people in hospital were vaccinated.  9 weeks later that number has risen to 39%.

Vaccine effectiveness is waning.  As I have posted previously the loss of protection accelerates with time.  In a month or 2 the vaccines will offer no protection.  This has happened everywhere.  We have no reason to believe that it will not happen here.  Trudeau’s incompetence just pushed our problem in to the winter.

The other way that government incompetence keeps us in the dark is data quality.  The only numbers the Canadian government publishes without delay are COVID cases and deaths.  It is easy to keep these numbers up to date because they are fictitious.  They can be whatever you want them to be.  The important number is total deaths.  Our Bureaucracy is a lot less diligent when it comes to simply counting bodies.

Stascan publishes death figures every 6 weeks.  The updates are always 10 weeks behind and even then are nowhere near accurate.  As I have discussed in Previous Blog posts I never use this date without making substantial upward adjustments.  The last Update on October 14th has data up to July 15th , but data from June on is far from complete.

All over Europe excess deaths started soon after the second jab.  We have no reason to believe this is not happening in Canada.  We just don’t know it yet because of the poor quality of the data.  There simply is no good data since June, when he second jab started in Canada.  Right now we are blind to any problems.

That really is the problem with Canadians, we are happy in the dark.  It is a form of willful blindness.  We prefer to believe fairy tales over reality.  We believe the vaccines are working without evidence just as we believed the lockdowns worked.  For 2 years we have been told that our health care system is the on the verge of collapse yet we still believe it is the best system in the world.  What does a poor system look like when the best system in the world can’t handle cold and flu season?

Justin Trudeau once said that Canada is the first post national state.  That means Canada is not a nation and you cannot define what it is to be Canadian.  As always Justin is wrong.  It is easy to define what it means to be Canadian.  To be Canadian is to be arrogant in ignorance.  It is to believe that the failures of our government and system are somehow a measure of our success, and envied by other countries.  No wonder it was so easy for the government to remove our rights. 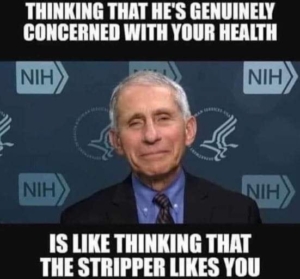 Subscribeto RSS Feed
There is no Logic to Vaccine PassportsPoliticians are Following the Science, Their Destination is not what you th...
Scroll to top