A few days ago when I posted that freedom was the only issue for me in the next election a friend sent me this excellent article on freedom.  Everyone Canadian needs to read this article because freedom might be the most misunderstood concept in Canada.  The average Canadian cannot even define freedom.  They are so clueless that even though they have no idea what freedom is they are sure they have it because they can still complain about government taking it away.

Every time I look at the condition of my country I am forced to the same conclusion; Canadian just are not that bright.  First, people complaining about the loss of freedom is not proof those freedoms were not lost.  Second that statement is not even true; Artur Pawloswki, Chris Sky, Tamara Lich, and dozens of other Canadians have been arrested, even imprisoned for complaining about losing freedoms.

If Canada was a free society the government would not be allowed to decide who lives and who dies yet that is exactly what they have been doing for the last 2.5 years.  Canadians were locked down multiple times in order to save seniors from COVID.  It did not work, not a single senior was saved, but even if it had worked, the government had no right to do this.  There is no way that the government did not know that people would die from the lockdowns.  The government made a conscious decision to trade some lives for others.  They were deciding who they wanted to keep and who they wanted to throw away.

If the government is allowed to make life and death decisions for you, you are not free.  Your life can be taken at any time on the pretext of saving others.  How many others?  If your heart is a match for someone the government judges to be more worthy than you, can they just take it?

If the last 2.5 years has proven anything it is that Canadians are not free.  You do not have freedom or rule of law when the Chief medical officer can hold a press conference to disclose who’s business gets destroyed this week.  Our Freedoms have been slowly taken by government and Canadians are so naïve they have not even noticed.  Worse than that it seems our freedoms were not just taken they were sold to the highest bidder.

It is not a coincidence that Canadian government policy benefits everyone except Canadians.  CSIS knows that Canadian politicians have been bought.  They have made no arrests because buying a politician is not illegal in Canada.  Politicians are supplementing their income by introducing new rules daily.  Rules that make it difficult to produce food, energy, or any product another country with deep pockets and shallow morals, might want to sell us.

Canadians really need to pull their heads out of the dark smelly places they are now.  If you were free you would be free to have the same size carbon foot print as Justin Trudeau.  Of course the government would never allow that to happen, and that is the point. 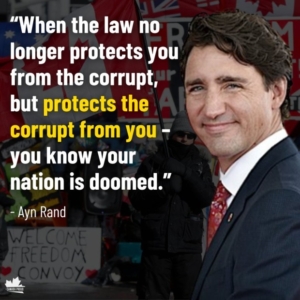 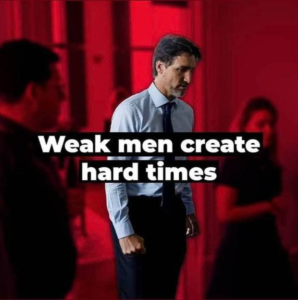 Subscribeto RSS Feed
The Playbook will outlast the Virus.We have an epidemic of selective Blindness
Scroll to top