I was working on another post that I set aside after hearing 2 stories that I just have to relay.  The first story came to me from a friend whose daughter competes on a college sports team.  The team was getting ready for their first tournament of the year when they had to cancel.  My Friends daughter tested positive and now the whole team has to self-isolate even though the rest of the team tested negative.

All of the women on the team are tested multiple times per week and this was the first positive test.  I don’t know how many women are on the team but by the sport I would say there is at least a dozen.  If you take a dozen people and test them multiple times per week eventually someone will test positive.  The PCR test produces far too many false positives for that not to happen.

I also competed on a University sports team.  Competing at that level is all consuming.  You spend all your time in the Gym and when you are not in the Gym you tend to hang out with your team mates.  Your social bubble does not go much further than your team.  If someone is tested multiple times per week and spends all of their time with a group that have all tested negative why would you not suspect a false positive?  Before you imprison a dozen young women why would you not re-test?

The college has a special dorm set up for students that have tested positive to self-isolate.  They are placed in these rooms and not allowed to leave.  In 2 days no one has checked in on my friend’s daughter.  If this disease is so deadly that you can violate the rights of a dozen women who did not test positive why aren’t they concerned about the health of the one woman who did test positive?

The first story can be chalked up to simple incompetence.  Just a bunch of college administrators trying to follow the rules and doing it poorly.  The second story is much more sinister.

I have mentioned before that I have friends that run martial arts studios.  Most of their schools have been closed because of the restrictions on group fitness training.  One thing the government has steadfastly refused to understand is that when you prevent a person from working it causes hardship.  You would think that is self-evident but very few of our elected officials or top level bureaucrats understand this.  Government is a bubble, it does not matter what happens you still get paid and get a raise at the end of the year.  People inside that bubble are oblivious to the fact that the rest of the world does not work that way.

In the real world if you don’t work, you and your family don’t eat.  Last I checked even someone as incompetent as Deena Hinshaw understands starvation is a serious public health issue.  My friends, like any good businessmen, went through the new rules to see if there was any way they could ply their trade and make a living.  The new rules allow for personal training.  They even took the time to phone AHS to confirm they had interpreted the rules correctly.  After receiving confirmation, they set up private one on one training with clients that were willing to pay the extra costs.  During their first session they got an unwelcome visit from health inspectors accompanied by police.

Let’s step back for a minute and think about that.  I don’t know the details of the conversation with Alberta Health Services but I am sure that they did not discuss the time of their first session.  Even if they had, I have never seen the government to be organized or efficient enough to pass that date and time on to another agency.  Someone had to have seen them and reported them to the police.  One of their neighbors turned them in.

Neighbors and family reporting on each other is what used to happen in the Soviet Union.  The government encouraged people to spy and report on each other.  When the Soviet Union fell their economies were in shambles for decades because a market economy relies on trust and the government had succeeded in destroying trust.  It took a full generation to restore that trust.  Covid 1984 has turned us in to the Soviet Union.  How long do you think it will take to restore the trust we have lost?  What will be the long term economic impacts of that shattered trust?

The similarities with the Soviet Union don’t end there.  The visit was far from friendly.  3 health inspectors and 3 police officers showed up to threaten fines over a perfectly legal business transaction.  The Police did not have a copy of, or even understand the new rules.  My fiends showed them that the rules allowed them to do private sessions.  The Police were undeterred.  In their minds it was their authority and not the rules that mattered.  The only reason they did not issue a fine was that one of my friends had saved the voice mail from AHS confirming that personal training was allowed.

Apparently you need confirmation from a Bureaucrat now to avoid being fined for legal activities.  Does anyone know the number I need to call to get confirmation that I am allowed to drive the speed limit?

I have a message for any police officer who might stumble across my site.  If you think it is a good idea to hop in a car with a few of your buddies to go intimidate law abiding businessmen, you are in the wrong occupation.  Seriously, you should not be a cop, you don’t have the aptitude for it.  You should find a line of work that better suits your skill set.  I would suggest loan sharking and extortion. 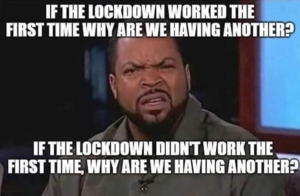