In a previous post I linked an article about how the 44 richest people in Canada increased their wealth through the lockdown.  If you donate to the right politician cold and flu season can be a great excuse to hobble your competition.  We saw the same thing in the US.  The various governors have pushed so much business to amazon that amazon is expanding their air fleet.  In normal times buying new planes would have been very expensive.  These are not normal times.

I am sure that WestJet and Delta were overjoyed to unload planes that the government will not let them use.  I am also sure if Amazon needs to buy new automobiles the federal government will ban use of personal automobiles so that Amazon can pick them up cheap.  Isn’t it interesting that WestJet is not allowed to fly to the Caribbean?  That freed up a lot of runway space for the Canadian government jets.  Serendipity, I guess.

The lockdowns have been very profitable for the super wealth and senior government officials.  This has all been at the expense of ordinary people.  Our Governments have used the excuse of a bad flu season to enrich their friends in high places. 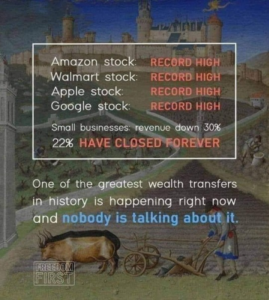 There is no doubt that Jeff Bezos profited handsomely from Covid in 2020 but no one had a better 2020 than communist China.

2008 to 2016 was a very good period for communist China.  Barack Obama tried to save the planet from being warm by banning coal and drilling everywhere he could.  To move the US towards more “green” energy he offered billions in subsidies for solar panels and windmills.  Both sides of this equation were very good for China.  The increased energy costs caused US factories to board up and move to China where, coincidentally, all the solar panels and wind mills are produced.

Barrack Obama presided over a sharp decline in the US economy while China’s influence grew.  Everything was coming up roses for China; but then came Trump.  Donald Trump’s pro energy, pro America policies dramatically reversed China’s fortunes.  Trump followed this with a trade war.  China no longer had the most favored nation status they had under the Obama administration.  The long term outlook for China was suddenly very bleak.  Then in 2020 along came a virus and everything changed.

The Covid lockdowns ground the American economy to a halt dramatically changing Donald Trump’s re-election chances.  Covid 19 was also used as an excuse to fundamentally change the way some states ran their elections.  For the first time ever mail in ballots were used.  The resulting fraud resulted in Donald trump losing to Joe Biden.

Things could not have worked out any better for communist China.  Not only did they get rid of a president whose every policy was detrimental to China, they got Joe Biden and Kamala Harris.  Joe and the Ho are the Chinese dream team.  Creepy Joe’s drug addled son did $1,500,000,000 of business with communist China while his dad was Vice President.  Kamala’s husband is a lawyer for a firm that specializes in Chinese business.  His firm has 140 lawyers dedicated to facilitating American business with China.

I have heard of the luck of the Irish but this is ridiculous.  In one day China was rid of the most adversarial US president since the Vietnam War.  Now they get to deal with 2 politicians they should know quite well.  After all China has been subsidizing the lavish lifestyles of both Joe and the Ho for decades now.

There are a few things in this tale of good fortune that I have failed to relay.  This Virus of good fortune originated in China; probably from a government lab.  The economy destroying lockdowns were an idea that was put forth by China.  The effectiveness of welding people in their homes was also data released from China.  Lastly many of the fraudulent ballots may also have been printed in China.  Was this good fortune or good planning?  You be the judge.

Subscribeto RSS Feed
This Farce Would End Quickly if the Covidiots Would Turn Off Their TVsIntegrity and Irony. Two Words the Media Can’t Even Spell
Scroll to top