A Friend sent this to me.  It is spot on and needs to be shared as much as possible.

What he says does not just apply to Vaccines.  There has been a consistent pattern throughout this farce.  Many people were asked to sacrifice to provide increased security to relatively few people.  We are told we are all in this together but that is a lie.

The people demanding protection tended to be older and wealthier than the people providing the protection.  Providing protection came at a steep cost.  Younger, less wealthy, people were forced into unemployment.  There was no consideration of the impact to their lives.  It was the most selfish thing I have ever witnessed.  The Masked Covidiots should be ashamed, but they will not be.  Demanding someone else suffer for your benefit is normal Boomer behavior.

If you were born between the years of 1946 to 1964 Wikipedia considers you to be a boomer.  Since I am about to say many bad things about boomers, I need to disclose that I am part of that group.  At the young end of the range, I have never thought of myself as a boomer.  I cannot escape it though; I am a boomer whether I identify as one or not.  Can I even say that these days when everyone gets to choose what they are?

Boomers are now between 57 and 75 years old.  The SARs CoV-2 virus finds this age group particularly attractive.  In Alberta 92% of all deaths and 73% of all hospitalizations were people over 60.  COVID was almost exclusively a disease for Boomers and the parents that coddled them.  We need to ask would any of this have happened if COVID was not killing Boomers?

Even before COVID, Boomers were destined to go down in history as the most selfish generation.  One of the reasons Boomers have money is that for most of their adult life they did not pay their fair share of taxes.  The plot below shows the growth in Canadian Government debt from 1970 onward.

After 2 world wars and the great depression government debt in Canada was only 18 billion.  Even the introduction of universal health care in 1957 did not change that much.  Governments were still able to balance their budgets and not increase the debt.  That all changed when the Boomers became old enough to vote.

By 1982 all the boomers were eligible to vote, and they had become the single largest voting bloc.  Boomers demanded more and more services from the government.  They also demanded that someone else pay for it.  That someone else was their unborn grand and great grandchildren.  Deficits and debt soared.

Boomers did not just eschew financial responsibility.  They tended to avoid any responsibility.  Divorce and abortions were higher for boomers than any previous or subsequent generation.  That brings us to the great boomer plague of 2020 otherwise AKA COVID 19.  Once again Boomers refused to take responsibility.

True to form the Boomers demanded others sacrifice and now be sacrificed for their protection.  It is well past time for my fellow boomers to grow up.  The world does not need to cater to your every whim.  Your protection is not someone else’s responsibility.  If you are worried about COVID go, get Vaccinated.  Just stop demanding that others do as well. 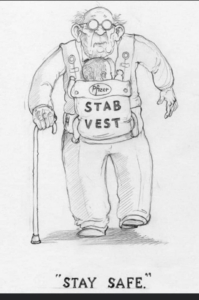