A Friend sent me this video

Dr. Coleman points out the number of COVID deaths in the UK were no higher than normal seasonal influenzas deaths.  He speculates that other countries also experienced a similar situation.  Well I can confirm COVID deaths in Canada also look very much like Influenzas.  The Plot below is total deaths per capita by week for the last 10 years in Canada.  The numbers are available online from StasCan. 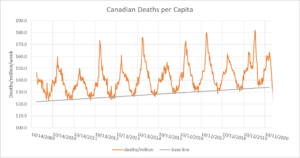 You can see that the baseline has been increasing over the entire period.  Deaths in Canada are going up each year because the average age in Canada is increasing.  People are getting older.  The easiest way to compare season to season is to flatten on this baseline.  When I do flatten on the baseline, COVID looks very normal. 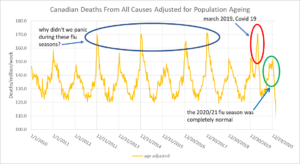 During the great COVID plague nothing unusual happened in Canada.  If the media had not run daily stories with running death counts, no one would have noticed.  If influenzas had the same PR team that COVID has we would have been frightened to death years ago.  As seasonal respiratory diseases go, COVID is not exceptional.  The hysterical over reaction from government is exceptional, and deadly.

Canadian politicians imposed the same draconian lockdowns that were utilized in the UK.  As Dr. Coleman points out some COVID deaths were not caused by the virus or any other natural cause.  Some deaths were caused by government.   This is not over yet.  Both Canada and the UK can expect elevated deaths due to government COVID misadventure for several years.  Lockdowns are the gift that keeps on giving.  Ultimately our governments, armed with stupidity and indifference, will kill more people than any virus could. 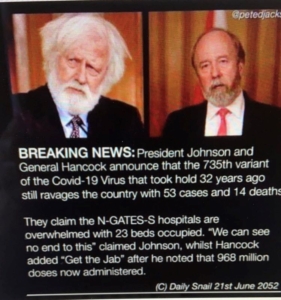 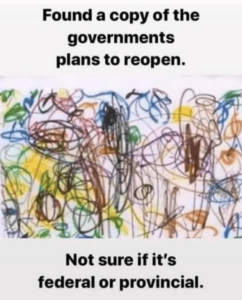