I apologize for the length.  Stick with it I promise to get to an important point.

Communist Chinese are everywhere they have infiltrated every western government and economy and barely anyone is talking about it.  The goal of every communist dictatorship was to spread communism throughout the globe.  The Soviet Union tried this for decades by supplying weapons to communist guerillas.  Initially this was a successful tactic and a few Latin American countries were flipped.  When the Soviet Union collapsed so did all of their client states except Cuba.

While the USSR was involved in a prolonged cold war with the US, China was largely silent.  This led a lot of academic deep thinkers to proclaim that Chinese communism was somehow different and that the Chinese were not interested in exporting communism around the globe.  That was a strange position to take since China was not shy about supporting communist revolutions where they could in Korea and Vietnam.

The Chinese were not spreading communism as actively as the soviets because they were smart.  They knew they were not in a position to do so and they did not have to as long as the soviets were willing to carry the water and face down the US.  The Chinese sat on the sidelines watched and learned.

The Soviets were never able to spread communism globally because all they had were weapons.  Marx taught that people would willingly rise up and throw out capitalism all they needed was the means to do so.  The Soviets supplied the means, the weapons, and it did not work.  Capitalism was more powerful than bullets.

The Chinese saw this and realized that you can’t defeat capitalism with traditional weapons.  China needed a new weapon that the soviets did not possess, economic might.  The soviets were a great military power supported by a weak economy.  Ronald Reagan saw this and destroyed them by simply pushing them in to an arms race that the soviets could not afford.  I was a young man when Reagan did this and the consensus was that it was recklessly dangerous.  None of the deep thinkers saw the beauty in the simplicity.  You could defeat the Soviet Union without firing a shot.  If their economy collapses the military goes with it.

Initially China used soviet style communism, state ownership of business.  They got the same results as the Soviets, grinding poverty.  When the Soviet Union Collapsed China knew they had to change before the US set their sights on them.  The Chinese pivoted to Nazis style socialism.  The government would allow private ownership of business that they would control by picking who owned the business and what they were allowed to produce.  This Nazis model of government regulated private ownership was far more effective than direct government ownership.

I know this is when everyone sits up and declares the Nazis were hard right not socialist.  After all hundreds of thousands of text books say so.  That is why right wingers are all so dangerous because they are Nazis, right?  I am willing to let you continue with the fiction that Nazis were right wing as long as you can explain to me 3 things.

When this pivot took place in China all the deep thinkers once again got it wrong.  They said that this was a clear sign that China was moving away from communism and that we should support their efforts by doing business with them.  The pointy headed academics encouraged us to buy the rope from China that they intended to hang us with.

It took decades for the Chinese to build up their economic might and now they are using it to undermine democracy everywhere.  China has strategically sprinkled money around the globe to buy influence.  Don’t believe me, then why did Canada secretly train Chinese troops?

Why did Canada turn over an abandoned military base in Penhold to China?

This is just to train commercial pilot’s right?   After all that is what the Chinese citizen told the reporter.  You can’t get more truthful than that can you?  If this was so innocent why has it been going on for 3 years and Canadians did not know about it?  Why was there no press conference touting how the government was supporting a Canadian contractor to provide commercial pilot training to Chinese pilots?  Do you really think there are any Canadian’s involved in this?

Justin Trudeau wants us to believe that it is somehow more efficient for China to send their students and flight instructors to Canada to train rather than training them in China.  Why don’t we just pack up the entire university of Alberta and the 30,000 students to a foreign country if it is so efficient?  Economically there is no advantage for China to do this.  There are however great military advantages.  Learning to fly and maintain aircraft in cold temperatures is probably very helpful.  Flying around Canada with no oversite taking pictures of Canadian infrastructure is extremely helpful and definitely something you cannot do in China.

Justin is very fond of communist china.  He said so on the campaign trail and Canadians were too stupid to understand how dangerous that makes him.  But is blind allegiance to communism enough?  The Soviets found out the hard way that it is not.  How much Chinese money do you think has found its way in to the Trudeau foundation and family bank accounts?

Money is how the Chinese are poised to destroy capitalism from within.  Canada is small potatoes; that is probably why the Chinese nickname for their Canadian servant is “little potato”.  The real prize is the US.  If the US falls the world belongs to China.

The Chinese have been very busy in the US.  For the most part the media has turned a blind eye to it, largely because China is such a big customer for them.  There have been times however that the Chinese get caught doing things that are just too hard to ignore, like these stories out of the US.

Feinstein was ‘mortified’ by FBI allegation that staffer was spy for China: report | Fox News

Inside the U.S.-China Espionage War – The Atlantic

The most egregious one of late is Eric Swalwell a member of the US defense intelligence committee.  Eric had a yearlong affair with a Chinese agent named Fang Fang.  If this was an Austin powers movie you know her name would be Bang Bang.  Austin would have slept with her but he would have been smart enough to know she was a Chinese agent.  Unfortunately for Americans Eric is not nearly as smart as Austin Powers: take a minute and let that sink in.

Eric Swalwell was obviously removed from the defense intelligence committee right?  I mean why would you leave an important position to someone who had displayed such poor judgement?  Sadly Eric is still on the committee enjoying all the perks of his senior position.  The media is not ignoring this they are actively providing cover for him and there aren’t any politicians calling for his head.  Everyone wants this to fade away.  If they fire Eric that won’t happen, people will want an investigation.  There are too many politicians in the US compromised by China to rock that boat.

The Corruption of the US political system reaches the highest level.  Joe Biden and his family have done billions of dollars of business with China.  You do not do business with China without doing business with the Chinese communist party.  After all they chose which party insiders are allowed to own businesses.  Joe Biden even shared an office for 3 years with a Chinese national.

If all of that was not bad enough, Creepy Joe’s connections to China may not have ended there.  2 weeks before the presidential election $400,000,000 found its way in to the Dominion Bank account.  Dominion provided thousands of vote counting machines that are at the center of the controversy now in the US.  They are Canadian company with Venezuelan roots that keep their computer servers in Spain and Germany.  Dominion is a very odd choice if you are worried about foreign election interference, but they were strangely popular in democrat states.

I don’t want to sound like the Sham Wow guy but wait there is more!  During the presidential campaign $300,000,000 of unknown origin just appeared in the Biden campaign fund.  The Democrats spent 2 years and $40,000,000 to find out Russia had taken out $200,000 in face book ads that somehow made the difference in the 2016 election.  Fast forward to 2020 and no one is even slightly curious about 3,500 times as much money going to one candidate and the guys who counted the votes.  The Chinese are way better at this than the Russians ever were.

Obviously the Chinese have spent a great deal of time and effort to get to this point but what does this have to do with Covid?  The US presidential election was very important to the Chinese.  It would be a huge understatement to say that the Chinese hate Donald Trump.  The Chinese cannot accomplish their end goal as long as Trump is in office.  All of the chess pieces were in place, all the Chinese needed was an opportunity.  The Chinese were not about to count on chance.  All they needed to get things rolling was release a virus along with the instructions on how to handle it.

It might be hard to believe but that was right from the horse’s mouth.  China released a virus and played up how deadly it was by releasing videos of people dropping dead in the street.  Then China instituted a sharp lockdown followed by data showing how effective it was at eliminating the virus.  Useful Idiots like Neil Ferguson ate it up.  We have a crisis and a way to handle it wrapped up with a nice bow from China.  All it took to keep this fire growing was stupidity and corruption.  There is no shortage of either of those in the halls of power in the west.  The media and the Politicians that China purchased over the years jumped right to the task of destroying us from within.

I admit I have been slow to accept this.  My brother has been telling me since March that there was a plan.  I dismissed it as simple incompetence but incompetence would not have gotten us to where we are right now.  When you put the pieces together, and I mean all the pieces going back to the collapse of the iron curtain it all makes sense.

This might seem a little tin foil hattish but consider this.  That evil little troll Jason Kenney and all the other Canadian premiers have instituted rules to handle a virus that have nothing to do with a virus.  They are choosing who is allowed to operate a business and what they are allowed to sell.  Doesn’t that sound eerily familiar and more than a little ominous?  This is not about a virus. 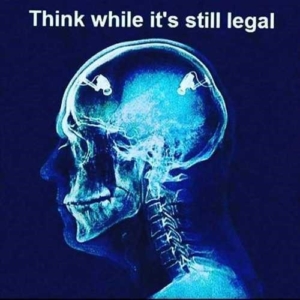