Yesterday I discussed Adam Skelly the owner of Adamson BBQ.  He has been arrested for the crime of barbeque in the time of covid.  His arrest has become Canada’s first flash point; Canadians are finally waking up and smelling the tyranny.  About 100 people showed up in front of Doug Ford’s house to show support for Mr. Skelly.  People are also showing up to protest in front of his restaurant.

This is the first but not the last (I hope) pushback against covid 1984 tyranny.  I am not sure if the average Canadian understands how important this is yet but the government surely does.  The Covid tyrants dispatched the police in a show of force to nip this in the bud.  See the video below.

Did you notice how many police officers are in the video?  How many cops does it take to secure a boarded up building?  Apparently there is no real crime in Toronto if the city can dedicate this many men to an empty building.  This is obviously an intimidation tactic.  Seriously what is wrong with these police officers?  If I was a cop and I was told that my only job for the day was to deprive law abiding citizens of barbequed food, I would have called in sick.

To all of the police officers in this video, you should be ashamed of yourselves.  The people that you were sent to intimidate are taxpayers who pay your god damn salary.  To the politicians and bureaucrats who think this naked show of force is appropriate, you better hope you win this fight.  If you lose and sanity ever prevails you will all be facing jail time for what you have done.

Canadians were once warriors.  Canadians are proud that we invented peace keeping but they forget that we also invented modern warfare.  Now we are just sheep.  Thankfully there are still warriors in the world.  In the UK Van Morrison and Eric Clapton are releasing anti-lockdown songs to support musicians who are no longer allowed to earn a living.  There are even politicians speaking out.

In the US the courts have stepped in to slap down some of the petty tyrants calling themselves governors.  Here is a recent decision from the US Supreme Court slapping down a left wing tyrant.

“At the same time, the Governor has chosen to impose no capacity restrictions on certain businesses he considers ‘essential.’ And it turns out the businesses the Governor considers essential include hardware stores, acupuncturists, and liquor stores. Bicycle repair shops, certain signage companies, accountants, lawyers, and insurance agents are all essential too. So, at least according to the Governor, it may be unsafe to go to church, but it is always fine to pick up another bottle of wine, shop for a new bike, or spend the afternoon exploring your distal points and meridians. Who knew public health would so perfectly align with secular convenience?”

“Indeed, the Governor is remarkably frank about this: In his judgment laundry and liquor, travel and tools, are all “essential” while traditional religious exercises are not. That is exactly the kind of discrimination the First Amendment forbids. “

Unfortunately this could never happen in Canada for 2 reasons.

Canadians are in trouble; we do not have rights we have privileges that right now the politicians have seen fit to remove.  We cannot count on politicians, police, or the courts to help us.  If we want to ever get back to normal we need to push back.  I am not talking about the new normal, I mean normal.  I am tired of being locked down for cold and flu season, how about you? 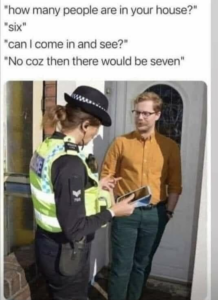 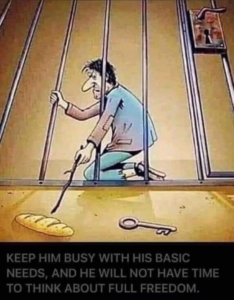 Subscribeto RSS Feed
What Ever Happened with To Serve and Protect? Why is that not a thing anym...This Adoration of Serial Killers Must End
Scroll to top