Justin Trudeau invoked the emergencies act, used it to punish his political opponents, and then suddenly dropped the emergency declaration before the senate had a chance to vote.  It was a whirlwind tour of complete tyranny that will leave a permanent stain on our country.  Any Canadian actually paying attention is left asking these questions.

The answer to the first question is personal greed.  In a parliamentary system any government sponsored bill or action is treated as a non-confidence vote.  If Trudeau had lost the vote in the House of Commons the governor general has no choice but to dissolve parliament and call an election.  An election right now would have been disastrous for the Liberals and NDP.

Trudeau is polling at 16%.  He is so unpopular it is tainting all liberals.  No Liberal riding would have been safe.  The same goes for Jagmeet Singh, the leader of the NDP.  Jagmeet lost ½ of his party’s seats in the last election and has stayed in Power by aligning himself with the Trudeau liberals.  The NDP likes to pretend that they care about ordinary blue collar Canadians but they just sat back and watched as the government trampled blue collar Canadians with horses.  A snap election would have devastated the NDP.

The vote passed with a count of 185 to 151.  An illegal emergency declaration was supported by 185 members of parliament because they were worried about their paycheck and political future.  185 liberal and NDP MPs would rather see Canadians abused and imprisoned than risk their paycheck.  These people have no values or moral compass.  Canada is in a crisis today because voters for decades elected people who care only about themselves.  Canadians have voted themselves in to tyranny. 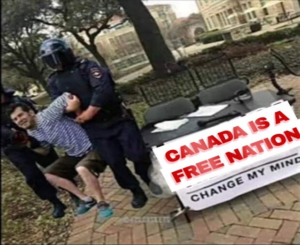 So Trudeau got what he wanted, why then, did he drop the emergency declaration so quickly?  The vote in the house was just the first hurdle.  The senate also had to vote and inevitably there would have been court challenges.  I doubt Trudeau was concerned about the court challenges; the senate vote was his real problem.

You might wonder, why would Trudeau not be concerned about the courts striking down an illegal emergency declaration?  Isn’t it the courts job to protect Canadian’s from the government behaving illegally?  Theoretically courts in Canada are supposed to ensure that anything the government is doing does not violate the constitution or established law.  Practically that never happens.

Courts in Canada have been corrupted by politics.  The Prime Minister appoints Federal and Supreme Court Judges without any vetting process.  The appointments are for life.  19 of the last 29 years Canada has had a Liberal prime minister.  Most of our Judges were appointed by Liberal prime Ministers and are Liberal party insiders.  As a result Canadian courts have a disgraceful track record of ignoring the law in favor of liberal politics.

Trudeau had very little to worry from the courts.  Despite Bold statements from some Premiers like Jason Kenney the court challenges were going nowhere.

“The judiciary has to establish limits on enacting an emergency declaration.”

Jason Kenney declared an emergency in March 2020 with only 3 known cases of a respiratory illness during cold and flu season.  At no time in the last 23 months has the province of Alberta had an emergency yet he has extended his own illegal emergency declaration for the entire period.  There is no way Jason Kenney would walk in to court to challenge Trudeau’s illegal declaration.  Trudeau’s lawyers would just throw his own criminal activity back in his face.  Even if Kenney was stupid enough to go forward there is zero chance the presiding Liberal Party member (AKA the judge) would rule in his favor.

Justin Trudeau just established a dangerous precedent in Canada.  Any time a Prime Minister is challenged he can declare an emergency, silence his critics, and then drop the emergency before the senate gets to vote.  There will be bluster from the premiers and silence from the courts.  This truly could be the end of rule of law in Canada. 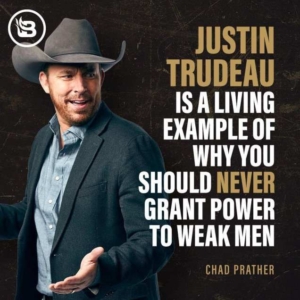 Justin Trudeau is the offspring of a communist dictator who was raised by a communist sympathizer.  His father and step father are watching from Hell and are very happy indeed.

Subscribeto RSS Feed
Simple Logic would have dictated a very Different PathA Canadian COVID therapeutic that is not legal in Canada?
Scroll to top