The COVID vaccines may have ended another lucrative sports career. 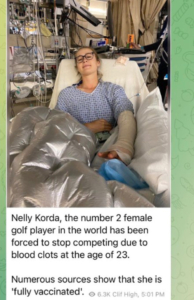 Of course everyone is careful not to blame the vaccine.  It is perfectly normal for a young fit person to develop serious blood clots, especially after taking a medication known to cause, you know, blood clots.

Rare medical conditions are no longer rare and it is getting very difficult to ignore.  Media and Government will not blame the vaccine for anything but they know it is only a matter of time before the public does.  That is why the narrative is changing.  Governments are re-writing history and claiming they did not force a needle in to your arm.

Australia, if you took the jab and you are unwell, or you die, it’s your own fault according to the powers that be. Everyone had a choice 😡💔 pic.twitter.com/2FicDc8fYX

Now the narrative is that you took the vaccine voluntarily so it is your fault.  The Government of Australia apparently did not force anyone to be vaccinated.  All they did was offer a clear choice.  Australians could “voluntarily” take the vaccine or they could be imprisoned and impoverished.  See, nobody was forced to do anything.

Governments normally do despicable things but they rarely do them on such a grand scale.  When this started these tyrants were confident they would get away with this, now they are not so sure.  In time I hope more people will understand this clear message from Christine Anderson.

Government is not now and never has been your friend but is both evil and unavoidable.  It is up to us to keep them in check and we did not.  From that perspective this really is our fault. 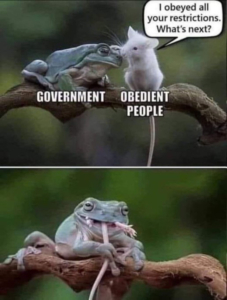 Subscribeto RSS Feed
A win for rule of LawThe “Choices” offered by Government only benefit Government.
Scroll to top