A Friend sent me this interview with Dr. Peter McCullough.  The interview is very good but very long.  Still it is well worth viewing.  I have previously posted a video of Dr. McCullough Testifying in the US.

Dr. McCullough begins the interview covering the same ground as his testimony.  He discusses how odd it is that so few doctors realize proven, effective treatments for COVID exist.  After repeating much of his testimony Dr. McCullough goes on to explain that doctors are unaware of treatment protocols because the information has been actively suppressed.

Hydroxychloroquine is discussed.  It works but only if administered early in conjunction with other drugs.  Dr. McCullough points out that this should have been expected.  He points out that viral infections are always treated with a combination of drugs and you do not wait to start treatment.

On March 19th 2020, President Trump made the mistake of mentioning hydroxychloroquine as a promising treatment.  March 2020 is when the lockdown madness started and lockdown proponents would not let an inexpensive drug derail their plans.  Almost as if on cue, the Lancet published a paper destroying the hydroxychloroquine narrative.  Dr. McCullough points out this paper was obviously fraudulent (it was later retracted by the Lancet) but that did not matter.

The anti-Hydroxychloroquine movement did not stop with one fraudulent paper.  There was a series of papers discrediting hydroxychloroquine.  In each case the drug was either, applied late, administered in toxic doses, or used without other drugs.  The trials were designed for failure.  These studies were all governments needed to ban hydroxychloroquine.  Even this was not enough for the lockdown Jihadists.  The world’s largest hydroxychloroquine factory was burned down.

Months later Ivermectin was found to be even more effective than Hydroxychloroquine.  It produced superior results and worked at any point in the infection.  President Trump used Ivermectin to quickly recover from his infection in September 2020.  To keep the jihadists at bay and prevent further arson Trump refrained from speaking about it.

Dr. McCullough ends the interview discussing the Vaccine.  He no longer recommends it and is mystified why this vaccine is not held to the same standard as other vaccines.  The COVID vaccines are the most deadly vaccines in history.  Other vaccines have been banned for producing 1% of the deaths already attributed to the COVID vaccines.

All roads lead to the Vaccine and Vaccine passports.  Something Chris Sky has been warning about for months.

Chris Sky nails it in one… #NoVaccinePassports #Covid19 #lockdown pic.twitter.com/KbRLxmgNRg

When this started I was quick to dismiss the restrictions as stupid people doing stupid things out of fear.  I have never held a high opinion of politicians.  Politics is a profession that attracts sociopaths with no skills other than a low animal cunning and talent for deception.  It was not hard to convince myself that in time sanity would prevail.  I can no longer believe that.  Even Politicians cannot be this stupid.  I cannot ignore the abundant evidence that this is being orchestrated.

From Day 1 things happened and persisted that could not be simple stupidity.  There is a pattern of events that demands attention.

Lockdowns had never been used before.  They were not recommended by the WHO and were not part of our pandemic response plan.  Yet they were imposed everywhere and we were told that they were a proven indispensable tool.  Great pressure was brought to bear on countries that would not impose them.  Sweden faced constant media criticism and the World Bank tried bribing Belarus.

Lockdowns persisted even after it was apparent they did not work.  Very few politicians asked why there was not an obvious difference between jurisdictions with tight restrictions and those using a lighter touch.  The Alberta Premier even noted that “there was not a linear relation between the restrictions and infections”.  He admitted there is no obvious benefit to lockdowns right before he announced new restrictions.

There was no reason to believe that masks would work.  The weave on most materials is simply not small enough to stop a virus.  The manufacturers of disposable ear loop masks post a warning right on the box.  Their product is not effective again coronaviruses.  Not a single politician has stepped forward to ask the obvious question.  If masks work why didn’t they?  Most places imposed mask mandates in the summer of 2020.  None of these places escaped the seasonal re-occurrence of COVID.

COVID is one of the most treatable diseases in history.  It can be thwarted by simple treatments including vitamin D.  I have posted information on multiple drugs that have shown to be effective.  India just demonstrated that Ivermectin is more effective at curbing an outbreak than the vaccines.  All of this valuable treatment information is being ignored or actively suppressed.

Normally a doctor runs tests to decide on treatment protocols.  Most doctors are unaware of effective COVID treatments.  After receiving a positive test patients are sent home without treatment.  In 2 weeks they either recover on their own, or they die.  The PCR test, as it is being used, serves no medical purpose.  The sole reason for testing is to increase the total for the evening news.

We spent billions performing test that doctors do no use.  Worse, we standardized on the PCR test.  The PCR tests produces large numbers of false positives.  Researchers and governments know this.  That is why they use a lower cycle threshold for post vaccination infections than pre vaccine infections.  The PCR test is not a medical tool, it is a political tool.

The COVID Vaccines are already the deadliest vaccines in history.  We have no idea what the long term effects of the vaccines might be.  Early tests with mRNA vaccines on animals produced disastrous long term effects.  The COVID Vaccines are not being held to the same high standard that other vaccines are.  These risks might be acceptable if there were no alternatives but that is not the case.  There are treatment options.  Seriously how many treatment option do you need for a disease that if left untreated has a 99% survival rate?

People who question the official narrative are called conspiracy theorists.  I did not start out believing there was a conspiracy but I have arrived there.  I simply cannot look at what is happening and conclude anything else.  Chris Sky and Dr. McCullough think vaccines and vaccine passports were the end game.  I am not so sure.  We have no doubt been funneled down the path to vaccines.  I just don’t think that is the end of the funnel. 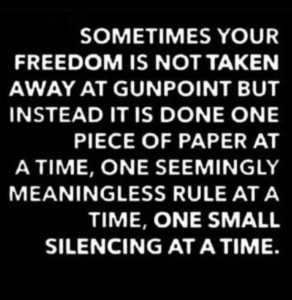 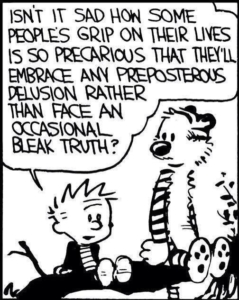 Subscribeto RSS Feed
If You Can’t Tell When an Emergency Started, How do You know When it is...Queen Deena Hates Christians
Scroll to top