I found this clip on Ivor Cummins site.  It is a panel discussion on Great Britain News.  One of the panelists explains she has not vaccinated her children because of her concern for long term side effects.  Her children are girls and she is specifically worried about menstrual and reproductive problems.  The host gives an “expert” on the panel a chance to address the mother’s concerns and this is what he does.

Kristina Rihanoff debates whether children as young as five should get the Covid jab on The Clash.

Did you catch that?  Instead of addressing the science he made an appeal to authority.  The concerned parent is wrong because the Royal College of obstetricians and gynecologists says she is wrong.  This is not following science it is following scientists or rather people with science degrees.

There is a huge difference between following science and following a scientist.  Scientists are human.  It is an undeniable fact that almost 100% of humans will agree with the person paying them.  They may not agree privately but they will always agree publically.  Britain’s health care system is similar to Canada’s.  Doctors are paid by the government.  Essentially what the “expert” panelist says we must not question a group of people paid by the government to say what the government wants you to hear.  Blind acceptance of authority is the exact opposite of science.

Now just because the “expert” panelist is paid to parrot the government line does not mean that he is wrong.  Even the government mistakenly tells the truth from time to time.  So is he wrong?  Is there no evidence of reproductive harm?  To answer that let’s turn to the US military.

The US military is its own parallel society.  They are self-contained with their own medical system.  They even have their own version of VAERS called DMED.

The common criticism of VAERS is that it is voluntary and therefore likely suffers from underreporting.  Well nothing in the US military is voluntary, including vaccination.  100% of the US military is jabbed and the military has comprehensive pre and post jab medical histories of their soldiers.  The effects on reproductive health are shocking; there has been a 300% increase in miscarriages.

The most fundamental building block of science is data and the data is clear; the jabs negatively affect reproductive health.  We may not know why this is happening yet but you cannot deny that it is happening or state that there is no evidence of reproductive harm.  It does not matter how many scientists are willing to lie in return for a paycheck it does not change the science.  Consensus arguments and appeals to authority are used when the science does not support the conclusion.  They are clear indications you are being lied to.  Think about that the next time the news starts with “scientists say”. 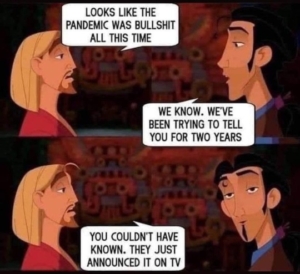