Every country in the world that aggressively pursued vaccinations saw sharply rising cases shortly afterwards.  Governments blamed it on the unvaccinated and to be fair it was unvaccinated people who did get sick initially.  But why did this even happen?  When no one was vaccinated the virus spread slowly.  Why the sudden acceleration?  To answer this question I am going to start with a very unlikely source, CNN.

CNN is a very reliable Network.  If you are a left wing tyrant you can rely on CNN to have your back.  No lie is too large for CNN as long as it forwards the left’s agenda.  That’s what makes this short clip so incredible.

CNN: “the information from the CDC is turning crucial things we were told about Covid upside down…the vaccinated are just as likely to spread Covid as the unvaccinated.”

This completely blows apart the argument for vaccine passports.#NoVaccinePassportspic.twitter.com/0WSOrBBEvQ

Even CNN no longer denies there are problems with the COVID jabs.  They admitted on air that vaccinated are just as likely as unvaccinated to spread the virus.  This is a stunning revelation for CNN but, if I was an internet fact checker, I would rate this as only “somewhat true”.  The whole truth is that vaccinated people are far more likely to transmit the virus.

At the start of this farce the media and government “invented” asymptomatic transfer.  They did this to make us frightened of each other and to explain how people became infected without direct contact.  There was never any evidence to support asymptomatic transfer.  Contact tracing shows that asymptomatic people do not even infect others in their own home.  Think about that for a minute.  Asymptomatic people do not infect family with close daily contact.  Yet the government wants you to believe that standing within 6 feet of someone will kill you.

Symptomatic people are the main source of viral transfer.  The symptoms are how the virus leaves their body.  Sneezing, coughing, runny nose; these are all avenues for the virus to exit an infected person and find a new host.  Symptomatic people are sick.  Sick people tend to stay home because they know they are contagious.  This naturally dampens the outbreak.  Unfortunately this was the Pre-jabbed world.

In the post Jab world asymptomatic people can have very high viral loads.  The CDC pointed this out 2 months ago.

The jabs are not designed to prevent infection, just lessen symptoms.  In the first 4 months after being jabbed, a person can become infected and develop very high viral loads without any symptoms.  They do not realize they are contagious.  Infected jabbed people keep their normal routines.  They circulate among and infect the un-jabbed.  As a result the virus spreads very quickly.  Even in the summer when it should hardly spread at all.

In a post Jab world asymptomatic transfer is very real and now probably the dominant transfer mechanism.  Not to worry though, this will be short lived.  There is a high degree of natural immunity in the un-jabbed population.  The virus only has so many places to go.  Also as the jab’s effectiveness wears off and ADE sets in, jabbed people will develop symptoms.  They will become sick and stop circulating among the general population.

We may be witnessing both phenomena in Alberta right now.  The current outbreak appears to be over.  % positivity appears to have peaked between September 7th and 10th.

The number of jabbed people being hospitalized is also growing. 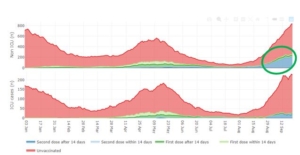 In a few months I expect Albertans will see the same thing Israel and England are already seeing.  The hospitals will be full of Jabbed people.  This is shaping up to be a very bad winter for Jabbed people.  The answer is not vaccine passports and more jabs.  We just need to ride this out and treat sick people early rather than let them die like we did over the last 2 winters. 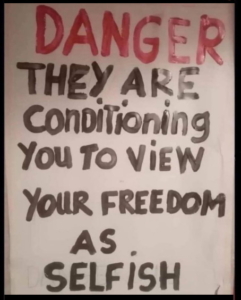