A few days ago I posted an interview with Dr. Byram Bridle.  It was an impromptu interview done on the street in front of interested bystanders.  At one point in the interview a spectator asked if the vaccines alter your DNA.  Dr. Bridle answered that it was theoretically possible but the he did not personally believe that it did.  We now have evidence that the vaccines do alter DNA just not directly.  Listen to this researcher explain that the spike proteins prevent your body from repairing damaged DNA.

The list of ways these vaccines damage your health and immune system seems to be endless.  With every passing day new damage mechanisms are discovered.  The only thing we know with certainty that the vaccines do not do, is prevent COVID.

Millions of people have already been adversely affected by these treatments and the data suggests the jabs are not done causing damage.  The damage mechanisms being discovered now like preventing DNA from being repaired and suppression of T cells will result in serious future problems and deaths.  We did all of this to fight a virus that does not kill anyone who gets early treatment.

mRNA vaccines have been a lot longer than you think.  They have just never been used on humans before and there is a good reason for that.  The animal trials were always disastrous.  The vaccine always caused more damage than the virus.  So they chose to take this failed technology and use it to reprogram your body to produce a toxin.

That alone is disturbing but with COVID the story is always worse than you can imagine.  Do you know how they were able to tailor this deadly technology to produce the spike protein?  They got the genetic sequence for the spike protein from the Chinese Communist party.

Let’s break this down to the bare facts.  The world was faced with a problem.  We had a new, probably man made virus that was infecting a lot of people.  Thankfully, within months doctors determined how to treat patients and found early treatment has 100% success.  So faced with those facts what was the government response?  They banned doctors from employing proven treatments and forced people to be vaccinated.  To produce the vaccine they took a failed technology and tailored it to the specifications of the Chinese Communist Party.  How is this not mass murder?

Our Governments are at war with their own citizens and they apparently have an alliance with the Chinese Communist Party. 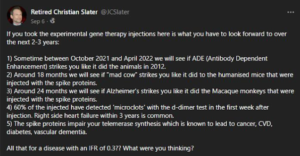 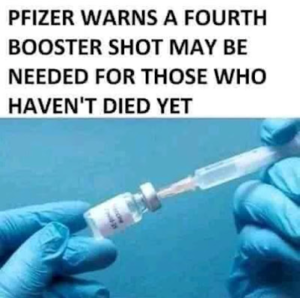