Nothing governments have done has had any discernable impact on the spread of the virus.  That includes the Vaccine passports.  So why do we persist with things that obviously do not work?  The legacy media will tell you that the public demands vaccine passports.  I have seen multiple news broadcasts where the media pulls some deluded individual off the street to exclaim how much safer he feels now that unvaccinated people have lost their rights.

But how wide spread is this sentiment?  Do the vaccinated really want a separated society where they never associate with the unclean, unvaxxed?  Actions do really speak louder than words and by their actions I would say that most people do not like the vaccine passports.  A lawyer in Bosnia challenged their vaccine passports and won.  Bosnia no longer has vaccine passports and guess what?  Europeans are now flooding in to Bosnia for Ski vacations.

Even when we look at Canadians (the most deluded people on earth) support for vaccine passports is not as high as the media would like you to believe.

Before the vaccine passports were implemented Canadian governments had polls showing the majority did not approve.  Theoretically in a democracy elected officials are supposed to represent the people.  They are supposed to enact the will of the people as long as it does not contradict established law.  The people did not want vaccine passports but we got them anyway?  What drummer are our elected officials dancing too?  Certainly not ours.

Vaccine passports don’t work and Canadians don’t want them so why do we have them?  What purpose do they serve?  Vaccine passports are just more of the same COVID strategy; separate and isolate to establish control.

What is the real reason for Covid lockdowns? pic.twitter.com/YPvP0IwgV3

Thanks to Robert Malone and Joe Rogan there is now a lot of attention given to Mass formation Psychosis.  All I can say is it is about time.  I have been pounding this drum for nearly 2 years.  All of this was intentional.  Governments intentionally isolated us and implanted fear.  They managed to hypnotize most of the population.  Thankfully this does not work on everyone.  There are strong willed, independent thinkers who have not succumbed to the conditioning.  People like this woman.

Don’t let the government win.  Hold fast.  Do not capitulate.  The hypnotized masses are done without us. 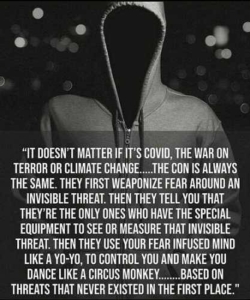 Subscribeto RSS Feed
We finally have a Health Emergency and the Media is ignoring it.A Tale of Two Tyrants
Scroll to top