My track record during this full frontal assault on our freedoms has been quite good.  My analysis and predictions have proven to be right more often than wrong.  I certainly have a better track record than any chief medical officer in this country.  When I have been wrong often it was because I underestimated the level of depravity our politicians would stoop to.  That is an incredible statement.  Few people have a lower opinion of politicians than me yet they still manage to surprise me.  When I think they can go no lower they always find a way to do just that.

Just 2 days ago I expressed doubt that vaccinated Canadians would stand up for the rights of unvaccinated Canadians.  I am so happy to say that I was wrong.  There was a large protest against vaccine passports in Montreal yesterday.

Once again the French are leading the way.  For those of you not familiar with Canada, Montreal is the largest city in the province of Quebec.  Quebecois are of French descent.  French rather than English is the predominant language in the province.

This must be deeply troubling for Justin Trudeau and the ruling liberals.  The liberals enjoy broad support in Quebec.  They have more Quebec MPs (members of parliament) than any other party.  Quebec is also Trudeau’s home province.  Justin called an election and immediately announced vaccine passports. The timing was not an accident.  He obviously had polls telling him that vaccine passports would be popular.  Now he is watching his own province reject them.

In Canada the French have always been more willing to stand up to government than the English.  Thankfully they have decided to pick up this banner.  Now it is up to English Canada.  What do you want freedom or tyranny?  Our French siblings choose freedom. 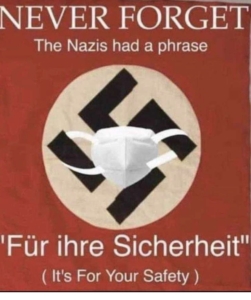