The Tyrant that runs British Columbia, a sociopath named John Horgan magnanimously decided that restaurants could open for in person dining again today.  What a prince.  I wonder what businesses he will decide to stop crushing tomorrow.

John Horgan wants praise for his repeated closures and openings of Restaurants.  John Horgan deserves a lot of things but praise is not one of them.  I have presented data in previous posts that Restaurants were not a significant source of infection.  This only stands to reason since sick people do not go out to eat.  Closing restaurants did not prevent infections.  It did prevent these hardworking women from earning a living. 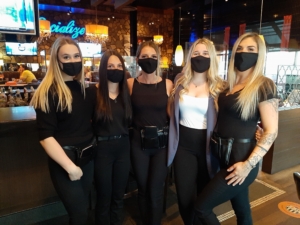 As luck would have it I was travelling to Dawson Creek BC today (where this picture was taken).  As an Albertan it was a rare treat to eat in a restaurant.  Restaurants in BC were only told this morning that they could open.  Despite that this restaurant was able to muster a full staff.  That was fortunate because they were packed.  For 15 months now people have been told to be afraid.  Be afraid of the virus, be afraid of restaurants, and be afraid of your own shadow.  The good people of Dawson Creek were having none of it.

Rural Canada is good for the soul.  Cities in Canada are full of people educated to the point of stupidity.  Rural Canada is full of real people.  People who still have common sense and control of all their faculties.  Urban Canadians elect Doug Ford, John Horgan, Jason Kenney, and Justin Trudeau.  Rural Canada looks on and wonders if the cities have lost their f$%cking minds.  The answer is yes.  Yes we have. 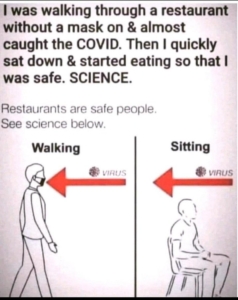