Since March of 2020, Jason Kenney has gone full Tyrant.  He has used a heavy hand to silence all dissent even using police to harass religious leaders who speak out.  Now in a bizarre twist he wants to be Mr. nice guy.  On Saturday he released this video.

If you were putting off booking your first vaccine dose, or waiting for a reason to book, here it is:
Your shot is your shot at $1 million.

Jason is all smiles as he talks about giving away money.  He is very pleased with himself indeed.  Of course, it is not his money he is giving away it is your money.  I have never seen a politician who was not orgasmic about spending other people’s money.

So why after 16 months of brandishing a stick has Jason decided to try a carrot?  Maybe he has finally discovered not everyone can be beaten into submission.  The Vaccine roll out proceeded exactly how I thought it would.  There would be an initial rush as nervous and panicky people lined up to be injected.  After the rush it would taper off.  You will never get to 100%.

When Alberta unveiled their 3rd (or is it 4th, it is so hard to keep count) re-open plan it was dramatically different from the previous plans.  Previous plans had milestones based on infection and hospital rates.  They were junked because they were too easy to achieve and simply would not keep us locked down long enough.  The Truth would not set us free, but Spring certainly would.

To keep this farce going longer Jason needed to shift the goal posts again.  The latest re-open plan targets vaccination rates.  Stage 3 requires 70% vaccination.  70% is a very aggressive target.  Especially in Alberta where some polls indicated 25% to 30% would not take the Vaccine.  It turns out the polls were right.  Vaccine demand peaked 4 weeks ago.  The plot below is from the Alberta government website.

Under normal circumstances these numbers would be heralded as a success.  The government was able to vaccinate quickly and efficiently everyone who wanted it.  Unfortunately achieving success depends on how you define success in the first place.  The government should have defined success as making the vaccine available to everyone who wanted it.  Instead, they chose an arbitrary number of 70%.

Alberta is now very close to the government goal; We are at 68.8%.  The problem is that almost no one is showing up for their first dose anymore.  Getting the last 1.2% will not be easy so Jason has decided to change gears.  He is hoping his lottery will convince about 50,000 to go get vaccinated to reach his target.

The chance at $1,000,000 will probably be enough to swing 50,000 people but that is not certain.  By now people’s positions have become quite entrenched.  I know mine have.  You have either drank the COVID Kool-Aid or you are still capable of independent thought.  I am not vaccinated.  I have many reasons for making that choice.  After 16 months of government abuse, I have 2 reasons that have nothing to do with the vaccine and how safe or effective it might be. 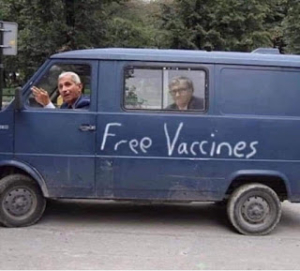