In March, the Ontario government extended their emergency powers to December. 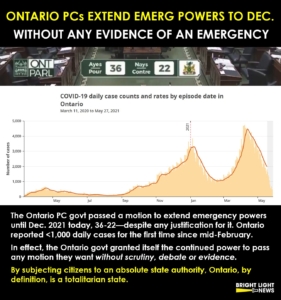 Now we have this from the federal government.

Only 1 MP voted against this.  I know many people agree with this.  Their attitude is that we do not have time for politics during an emergency.  I have one question for those people.  When will the emergency be over?

Normally the answer to that question is when we go back to normal.  What if we never left normal?  COVID is the first national/international emergency where nothing happened.  That is an incredibly bizarre yet true statement.  Below are the deaths due to all causes for both Ontario and Canada. 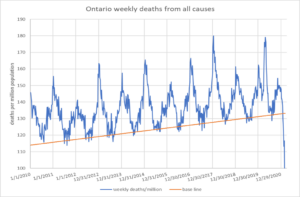 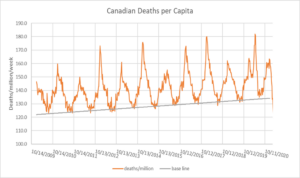 When I flatten on the base line to account for the aging population, they look like this. 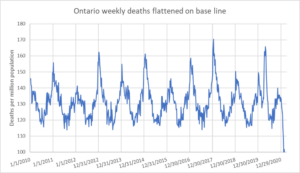 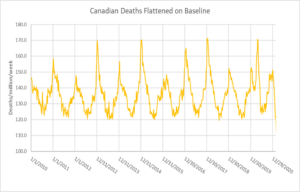 Despite all the media Hype COVID looks very much like a normal Cold and Flu season in Ontario and Canada.  I have pointed out this pattern before.  Deaths always rise in the winter and fall in the summer.  Summers are very consistent, but winters are not.  Some Influenza seasons are worse than others.  Because of this you really should not compare year to year.  You should compare winter to winter.  If I take the 12-month period from July to June and compare each year to the highest year in the period, this is what I get. 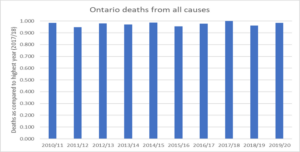 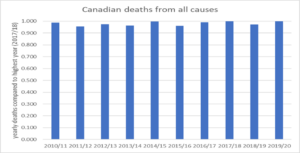 Can you spot the emergency?  The winter of 2019/20 (the first season of COVID) is not even the highest year in the period.  For both Ontario and Canada, the peak winter was the 2017/18 winter.  In Ontario COVID was not even the second highest, that was 2014/15.  This is what the bar charts looks like when I compared to the average rather than the highest year. 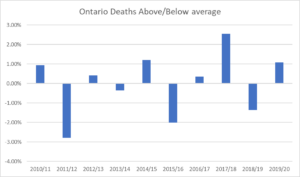 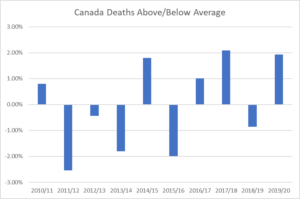 IF you think it is bizarre that the first season of the great COVID plague did not even manage to be the worst in the last 10 years, consider this.  The second season of this great plague (the 2020/21 winter) is on trend to be the lowest in 11 years. 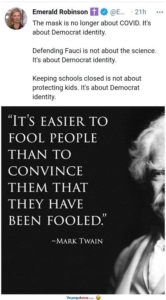