Israelis haven’t even finished with their 3rd jab and their government is already preparing for a fourth.  https://nationalfile.com/israels-covid-czar-tells-public-to-prepare-for-fourth-pfizer-booster-shot/

The Israeli government is in full blown panic mode because of the surge in COVID cases and hospitalizations.  See the plot below.

Israel vaccinated their population faster than any other industrialized country.  The plot below compares Israel to several significant countries. 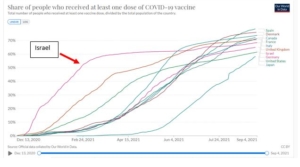 We are witnessing the spectacular failure of COVID vaccines in Israel.  The first 2 jabs did not work so a third was mandated.  Already 3 jabbers have shown up in hospitals with COVID.  The Israeli government is hoping the fourth time is a charm.  Talk about doubling down on stupid.  If the first 3 jabs have not worked what makes them think a fourth will?  How many jabs will it take before we abandon these toxic white elephants?

The situation in Israel is even worse than it looks.  In all likelihood Israel had already reached herd immunity before the vaccination programs began.  This was something I pointed out February 27th.  So was I wrong on February 27th?  How could Israel have such a problem after herd immunity was established?

These toxic jabs have many nasty side effects.  The worst side effect is of course sudden death.  Right now in Israel we are witnessing what might be the next worst side effect.  It seems the Jabs destroy natural immunity.  The video below is Dr. Geert Vanden Bosshe explaining how.

This is not new.  Months ago I posted that the Red Cross would no longer allow vaccinated people to donate convalescent plasma.  Their stated reason was that the vaccines seemed to be destroying natural immunity.  The destruction of natural immunity coupled with ADE is on full display in Israel now.  If not for the vaccines, Israel would have very few COVID cases.  A fourth jab will only make things worse.

Canadians should be watching with trepidation right now.  We will be there in a couple of months.  Just in time for the peak of flu season. 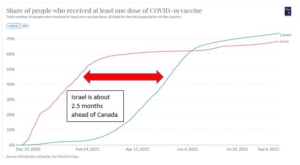 Israel may have gotten there first but we are headed to the same place.  Every Canadian federal leader is touting some sort of vaccine mandate right now.  Why the hell would we want what Israel has?  This needs to stop.  It needs to stop now before we make the problem worse.

But we won’t stop of course.  The vaccines are doing exactly what they were intended to do.  Sudden death, ADE, and the destruction of natural immunity are not side effects.  If they were we would have stopped this nonsense before now.  The only logical conclusion is that COVID jabs are doing exactly what politicians want them to do. The jabs were never meant to end the pandemic or lessen suffering.  They are to prolong the pandemic and kill people.

This is not about a virus. 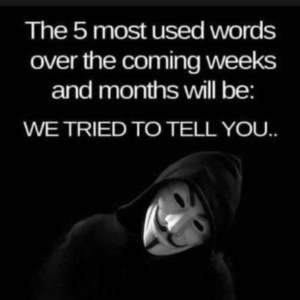