Yesterday US Congressman @RepBobGood cited @JustinTrudeau's Liberals as an example of an "oppressive government" alongside the likes of China as the prime minister met with President Joe Biden for the Summit of the Americas. #cdnpoli pic.twitter.com/LafUsx3pEr

People refuse to believe that we live under tyranny because Canada is a democracy.  What Canadians don’t understand is that democracy only works if you use it.  The only way for voters to bring tyrannical politicians to heel is through the ballot box, something that Canadians steadfastly refuse to do.  Doug Ford just got re-elected with another majority government.  After 2 years violating rights and destroying lives Doug Ford should not be in charge of anything let alone the largest province in Canada.  Doug Ford is a criminal who should be in prison.

The sad truth about Canada is that criminals like Doug Ford and Justin Trudeau are in office because Canadians keep putting them there.  Ignorance and apathy are the allies of these Tyrants.  Low information voters make their world go round.  Canadians are the very definition of low information voters.  Every day our media deluges us with government propaganda and most Canadians accept it without a moment of thought.  Sadly it is voters not criminals like Ford and Trudeau that make this country dysfunctional.

Decades of ignorance in Canada have allowed the rot in our public institutions grow so deep I am not sure this country can be fixed.  Recently Albertan’s scored a pyric victory by getting rid of a career criminal.  Albertans can’t celebrate that the demonic dwarf is leaving because he has pledged to remain on long enough to ensure his successor is no better than he is.  So far it looks like things are proceeding as per Jason’s plan; the people vying to replace him may as well be his clones.

One of the candidates, Danielle Smith, calls herself a libertarian.  This would be encouraging but Kenney also claimed to be a libertarian and he was in reality a big government, Justin Trudeau Fan boy; the exact opposite of a libertarian.  Because of Alberta’s past history of communists in libertarian clothing I decided to test our latest “savior” with a few simple questions.  In fact it was the same question applied a few times.  Below is the email I sent to Danielle.

We have never met but you might remember we exchanged emails about COVID several months ago.  I am writing to ask a couple questions about your leadership bid.  I joined the UCP specifically to vote against Jason Kenney.  I have no intentions of staying with the party if they do not choose a pro-freedom Candidate as the leader.  I saw your Rebel news interview and I think you could be that candidate.  That brings me to my question; how far are you willing to go for freedom?

It is easy to say there will be no more lockdowns.  You might even keep that promise but the next person may not.  Preventing another lockdown even after you leave is simple.  Abolish the emergency management act.  No free society should have a law that allows a politician to bypass all other laws by declaring an emergency.  The law needs to be scrapped or re-written to state that after 14 days the emergency cannot be extended without a unanimous vote in the legislature.  If it was a real emergency a unanimous vote would not be a problem.

Albertans were deprived of their rights for 2 years because of this ridiculous piece of legislation.  COVID was a problem but at no time did it rise to the level of an emergency.  COVID was nothing more than a bad flu.  Before you push back on that statement go look at deaths from all causes.  The spike in 2020 was roughly equivalent to the 2017/18 cold and flu seasons, the next 2 winters were completely average.  Virologists might argue that COVID acts differently than influenza but the net result was the same.  We did not have a single season where the deaths are outside the normal range.  Jason Kenney will tell you that is due to the restrictions but that is just another lie.  The research is clear lockdowns had little to no effect viral spread and actually increased the number of deaths.  You cannot hide from an airborne virus.  It is that simple.

What Jason Kenney did fell under the act but in my mind it was still criminal because there was no actual emergency.  Just a man who is too much of a coward to do the right thing.  So again how far are you willing to go for freedom?  The best way to ensure no more lockdowns is to punish the people responsible for this one.  That goes up to the highest levels of our government and bureaucracy.  The biggest threat to freedom in our country is the size and overreach of government.  Saying no more lockdowns will not ensure freedom.  Government’s wings need to be clipped.  The government that governs least governs best.

Someone from the Danielle’s staff answered that they would target the regulations.  Why target and not eliminate?  There was no commitment to abolishing legislation that allows a premier to suspend rights by declaring a fake emergency.  I can only conclude that means Danielle wants to preserve this power to use later.

Notice also I received no answer for the last 2 questions.  So in a nut shell the laws won’t change, no one will be punished, and government will continue to grow.  In other words no change in the status quo.  Albertans will not get their rights back and they damn well better behave.  This is from the libertarian candidate.  Just imagine what the other guy will do.  If this is the best our democratic process can do then we are royally screwed.  I mean Prince Andrew on an underage girl kind of screwed.  Canada is broken beyond repair.  We need to trash the whole thing and start over. 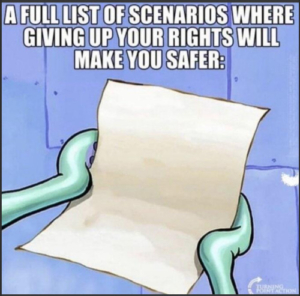 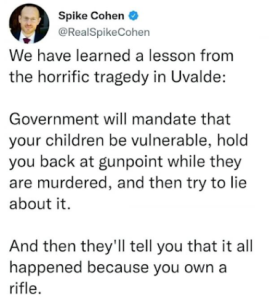