In a pre-jab world most people had nothing to fear from COVID.  Multiple studies showed that 80 to 90% of the population had some sort of pre-existing immunity or tolerance to the virus.  This was also confirmed by contact tracing.  77% of the time symptomatic people did not infect anyone else in their household during quarantine.  For 80% of the population the virus was not a pathogen.  It did not cause infection or disease.

But we don’t live in a pre-jab world anymore.  That is why we now see things like this.

In a pre-jab world this would have been a nearly statistically impossible occurrence.  There is no way you could have infected 40% of any sizable group because only 20% of them were susceptible in the first place.

For months I have been warning that the jabs do 3 very undesirable things.  They cause ADE, destroy natural immunity, and cause a general weakening of the immune system.  ADE makes infections worse while the last 2 make infection more likely.  Thankfully we have not seen much ADE.  The case fatality rate from the last vaccine induced surge was not any higher than previous.  Of course the case fatality rate for this virus has never been that high and if government got out of the way it would be zero instead of near zero.

What we are seeing is increased infection rates.  Rates that are likely much higher than what is being reported.  If you are jabbed and not a professional athlete you only get tested when you show up at the hospital. Even in the pre-jab world most COVID cases did not result in hospitalization.  As the winter drags on more and more people will show up in hospitals.  It will soon be apparent to everyone that the jabs have made things worse.  We are already seeing that in places like Gibraltar. 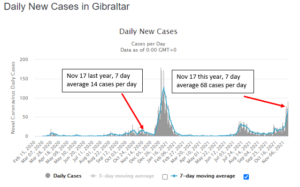 This year with 100% vaccination and 40% boosters Gibraltar has 5 times as many COVID cases as the same period last year.  It is tempting to say that the jabs have made no difference but that would not be correct.  The jabs have made a big difference.  This would not have been possible without them.  Gibraltar already has a 20% infection rate; if it was not for the jabs there would be no one left to infect.

These 2 cases prove beyond a shadow of a doubt that the jabs do not work, they only make things worse.  We would be better off without them.  The vaccination programs should be stopped yet governments are moving the opposite direction.  We are now jabbing children and placing un-jabbed under house arrest.  This is not stupid it is criminal.

It is not that the government does not care, they care deeply, just not about your health.  The jabs are working exactly as the government hoped.  They are increasing the number of people who are at risk of infection.  How do I know this is their desired outcome?  Well actions speak louder than words.  The first thing the government does after you have been infected is to urge you to be vaccinated.  Their top concern after you have recovered is making sure you get sick again.

Wake up.  This is not about a virus. 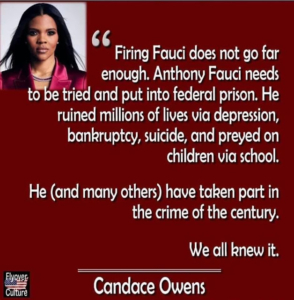