A few weeks ago we were inundated with stories of a terrible COVID outbreak in India.  The numbers certainly sounded scary.  India saw almost 400,000 new cases in a single day.  There were just a few things the Media neglected to tell you about India. 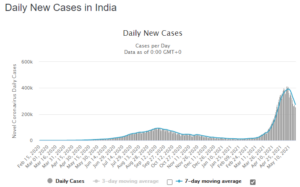 So what happened in India?  Was the surge caused by vaccinations?  Why did it end so suddenly?  Let’s start with the first question.  India is vaccinating large numbers of people every day but as we have seen a large number is still a drop in the bucket for India.  Less than 10% of Indians have been vaccinated so in this case the vaccines are an unlikely culprit.

If it was not the vaccines then what was it?  Ivermectin, or more precisely, the lack of it.  Doctors in India were routinely prescribing for Ivermectin at the first sign of symptoms.  You can see this worked very well during the start of the season.  Then Indian doctors came under pressure to stop using it.  After that cases exploded.  I read a testimonial from an Indian doctor weeks ago stating this.  Because I could not verify if it was real, I did not post about it before.  I am inclined to believe it now for one simple reason, which also happens to be the answer to my second question.  It was mass distribution of Ivermectin that stopped the infection.  See below.

So how can I be sure that it was Ivermectin and not the vaccines or some other factor that caused this drop?  Well, not every state in India was smart enough to ignore the WHO.  The WHO has vigorously worked to maximize COVID deaths.  They had previously warned about the use of Ivermectin and had pressured Indian doctors to stop using it.  The WHO was not about to sit on their hands and let India resume doing something that worked.  They immediately issued this warning.

One southern state in India (Tamil Nadu) made the mistake of following the WHO guidance.  They stopped using Ivermectin and started using the more expensive Remdesivir.  This decision had deadly consequences.  Cases and deaths continue to soar in Tamil Nadu while they are falling everywhere else. 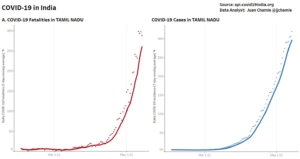 Beware of Bureaucrats bearing health advice.  Especially those financed by China and the Gates Foundation.

With Ivermectin India was able to achieve a reduction in infections that no country has seen with Vaccines.  By now it should be apparent Ivermectin is a far better solution than Vaccines.  The following is a short list of how Ivermectin is superior to vaccines.

Vaccines are a sledge hammer while Ivermectin is a scalpel.  I have posted several times about the mounting evidence of natural immunity.  Most people being Vaccinated are already immune and do not need it.  We are wasting time and money treating these people.  They are also taking an unnecessary risk, however small it might be.

If we had chosen to focus our efforts on the ill we would have been far better off.  Imagine that; no lockdowns, no masks, no business bankruptcies and no unemployment.  All of that and ill people would have received the treatment that they needed rather than heart felt eulogies. 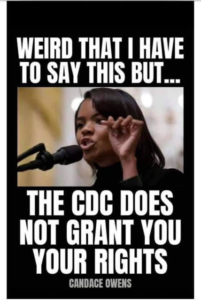