The “Donald Trump is the antichrist” stories were also very uniform.  Every author relayed with great certainty that the “riot” last Wednesday was caused by Trump’s “unfounded” claims of election fraud.  I found the choice of language quite interesting.

All summer we saw peaceful protests that resulted in billions of dollars lost due to arson, vandalism, and looting.  Armed peaceful protesters attacked and killed civilians and police officers.  On Wednesday the vandalism was curbed by rioters themselves who also took the time to clean up after they were done.  None of the rioters produced any weapons even after an unarmed rioter was shot to death by police.  One police officer died but the media has been strangely quiet about the circumstances of his death.

So now peaceful protesting can be recognized by the following attributes

Rioting on the other hand includes

It has been a long time since I have been in school but the definitions of peaceful and rioting have certainly changed over the years.  The same is true of unfounded.  That used to mean there is an absence of supporting evidence.  There is a mountain of evidence of election fraud in the US.  The definition of unfounded now seems to be anything the media ignores or refuses to investigate.

I like this new definition and I look forward to the media using it with respect to Covid.  Since the media has steadfastly refused to do any actual journalism when it comes to Covid everything can be described as unfounded.  I can see the headlines now;

Since the days are gone when the media reports information that has been investigated, the possibilities are endless.  I expect we will see the word unfounded used quite lot in the future. 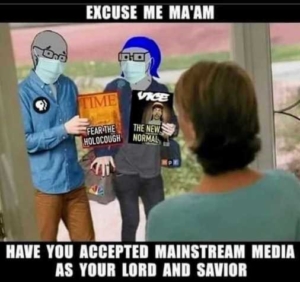 Subscribeto RSS Feed
Covid and 2020 Were Very Good For Billionaires and CommunistsStupid is as Stupid does. The Story of Doug Ford’s Political Career
Scroll to top