Israel is one of the first countries in the world to use covid vaccination passports.  You cannot go to a bar, theatre, or gym without your green pass.

I have to say that I am shocked.  Given their history I would have thought Jews would have been far more sensitive to this.  It has been 80 years since Jews were forced to participate in medical experiments.  It did not turn out well for them last time.  Now their own government is doing this to them.  Apparently the most severe symptom of Covid 1984 is a rapid and permanent loss of IQ.

The Israelis are able to implement Vaccination passports because they have been incredibly efficient at injecting people.  Below is a plot comparing Israel to other major countries. 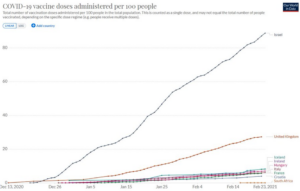 Israel has been far more efficient at injecting people than any other country.  The speed at which Israel was able to inject people gives us some very interesting data.  See the plot below 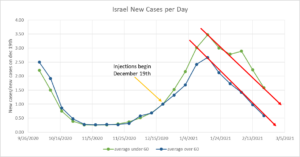 I took this data from the Our World website.  Cases continued to climb until 4 weeks after starting their injection program.  Then daily new cases for both age groups over 60 (blue line) and Under 60 (green line) began to plummet.  Notice the fall in cases started the same week and the decline for both age groups is identical.

This is good right?  Doesn’t this show that the Vaccine is equally effective for all ages?  No it does not.  Once again the devil is in the details.  The same plot is reproduced below with some pertinent details. 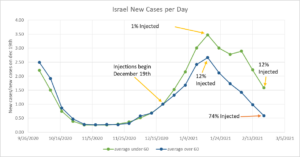 So does this mean the Injections are not effective?  Maybe but I don’t think so.  The injections did prevent infections in the trials so I don’t think you can say this proves they don’t work.  I think what this tells us is that most of the people who received the injections were already immune and did not need the gene therapy they were subjected to.

The Israelis government is forcing their citizens to participate in an experiment.  Every day we learn about more harmful side effects of the experiment.  Unfortunately there is no quantifiable benefit.  This has been all pain for no gain.  The Israelis more than anyone should have known better.

Subscribeto RSS Feed
Canadian Tire has a Lot of Explaining to do. The Abject Evil of Professional Politicians
Scroll to top