Surprisingly, now that the cold weather has hit, we are seeing a completely unexpected phenomenon.  People are getting cold and flu during cold and flu season.  Really who could have predicted that?  Obviously something had to happen. So the best minds in government got together and decided to do more of what was already not working.

Canadian premiers have painted themselves in to an uncomfortable corner.  Since they are already restricting unvaccinated the only way they can increase restrictions is to further restrict vaccinated people.  It is getting very difficult to tell people that they need to be vaccinated when they are subject to the same restrictions as unvaxxed.

Vaccine mandates and passports are clearly illegal in Canada so each premier hired an army of lawyers to find a way around the law.  I remember a time when the Premiers job was to up hold rather than subvert the law.  I guess I am really dating myself with that admission.  In Alberta lawyers decided the best way to subvert the law was careful wording.

In Alberta we do not have vaccine passports, rather businesses can opt in to the restriction exemption program.  That is a program that allows businesses to ignore some restrictions as long as they violate the law by forcing their customers to disclose private medical information.  You can ignore rules if you break laws, isn’t that a great message for Albertans?

Jason Kenney, The demonic dwarf premier of Alberta, is quite proud of this program.  Most businesses willingly broke the law so that Jason did not have to.  I will bet these business owners are starting to feel the twinges of regret today.  Yesterday Jason made the restriction exemption program more restrictive.  We are just 2 variants away from the restriction exemption program being as restrictive as everything else.  The only difference between companies participating and those not participating will be all the money wasted on QR code scanners.

After 2 years in with Vaccines and boosters we find ourselves right back at square one.  How much longer will Albertans put up with this?  Isn’t it obvious that we need to change course? 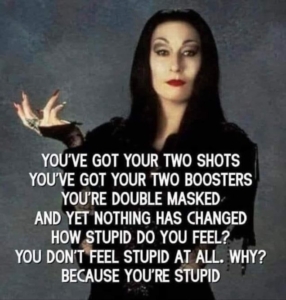