Last night Jason Kenney held a press conference to tell Albertans we have run out of vaccines.  We have been Vaccinating people for only 2 weeks and the program is already off the rails.  I guess they do not make keystone cop movies anymore because they cannot compete with the evening news.

But It is not the evil troll’s fault that the vaccines did not get delivered is it?  Yes, but that is not what I am talking about.  Once again, the devil is in the details.  Jason was proud to say that Alberta was set up to do 50,000 vaccinations/week.  This capacity seems to be built around the delivery schedule of the vaccine.  This is good planning, right?  No not really.

The Kenney Government like governments everywhere are talking about making vaccines mandatory.  They are all careful to say that the vaccine will not be mandatory but people who are not vaccinated will have their rights suspended indefinitely.  Just one more way the government lets us know that we do not have rights we have privileges.  Privileges that are extended to us only after we demonstrate complete submission to government.

Our politicians want the vaccination to be mandatory, but it will take almost 4 years to vaccinate everyone.  I wish I could tell you that this is as bad as it gets but it is not.  We have been repeatedly told that immunity from the vaccine is not permanent.  You will need booster shots on a regular basis.  Some reports have suggested that the immunity might last only months.  If I assume you need a booster shot every 12 months, then once Alberta Vaccinates 2,600,000 people, we will have to stop vaccinating new people.  We would only have enough vaccine to give boosters to those who have already been vaccinated.  Unless there is a dramatic increase in Vaccine availability 42% of Albertans will never be Vaccinated.

We have been told for a year now that vaccinations are the end game.  They are the only way out.  We need to hide in our basement wearing masks until everyone is vaccinated.  Now we know that unless there is a dramatic increase in supply that will never happen.

I have said from the beginning building your plan around a vaccine is a bad idea.  There has never been a successful corona virus vaccine.  An experimental technology (mRNA Vaccines), that has never been used before, was rushed through approvals with only 2 months of testing.  The tests were promising but we still do not know if it works and we cannot get enough anyway.

By focusing on vaccines, we have chosen to treat 4.5 million people.  The overwhelming majority were not sick and did not require any attention.  Only 5,005 Albertans have been hospitalized.  801 required critical care.  If we had focused on treatment options and research this would have been a very manageable problem.  Instead, we chose lockdowns and vaccines impacting the lives of millions of people who were at very little risk.  If you are under 70 this virus is less risk than normal influenza.  The government once again took a small problem, made it big, and bungled it horribly.

It is now the 3rd week in January.  Normally seasonal viruses start to wane in January and guess what? 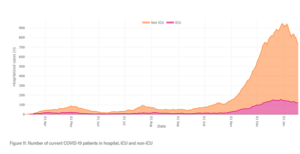 The only thing they seem intent on conserving is the level of incompetence our government has displayed since Ed Stelmach.