This plot showed up on Ivor Cummins Twitter feed.  I do not know where it came from or how they rated countries on lockdown stringency.  To truth check this I looked at the extreme ends of the scale.  According to their rankings Chile had the hardest lockdown while Finland and Estonia had the easiest restrictions. 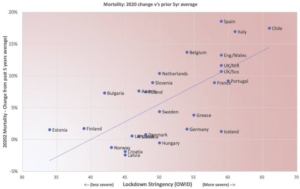 This plot does not use covid deaths but death more than average (excess deaths), the same kind of thing that Euromo tracks.  You can see the harder the lockdown the more excess deaths a country had.  This plot could be telling us 1 of 2 things.

Of course, Jason Kenney and Deena Hinshaw would tell you that the first answer is the only answer.  Anyone with common sense would know that they are lying, again.

Lockdowns cannot prevent infections.  At best a Lockdown makes it more difficult to spread the virus.  The virus will still work its way through the population it will just take more time.  Remember lockdowns were originally proposed to flatten not eliminate the curve.  If, after a full year of flattening, you have more excess death than the guy who did not try to “flatten the curve” those deaths were not caused by the virus.

Even if lockdowns worked all they do is prolong the misery.  The evidence is clear, not only did they not work they increased the misery.  This is hardly surprising; lockdown isolation, stress, and panic make people more susceptible to illness.  There is nothing about a lockdown that is good for overall public health.  If our Governments were not so indifferent to human suffering, they would have stopped this nonsense already.

I have said many times that lockdown’s kill.  That is not technically correct.  A gun is an inanimate object, on its own it does not kill.  The person that uses the gun is the killer.  Lockdowns are like guns it is their application that can kill.  Governments kill, currently their weapon of choice is lockdowns.

Subscribeto RSS Feed
Why Do Swedish Children Know More About Covid Than Canadian Adults?It is Time to Trim the Payroll
Scroll to top